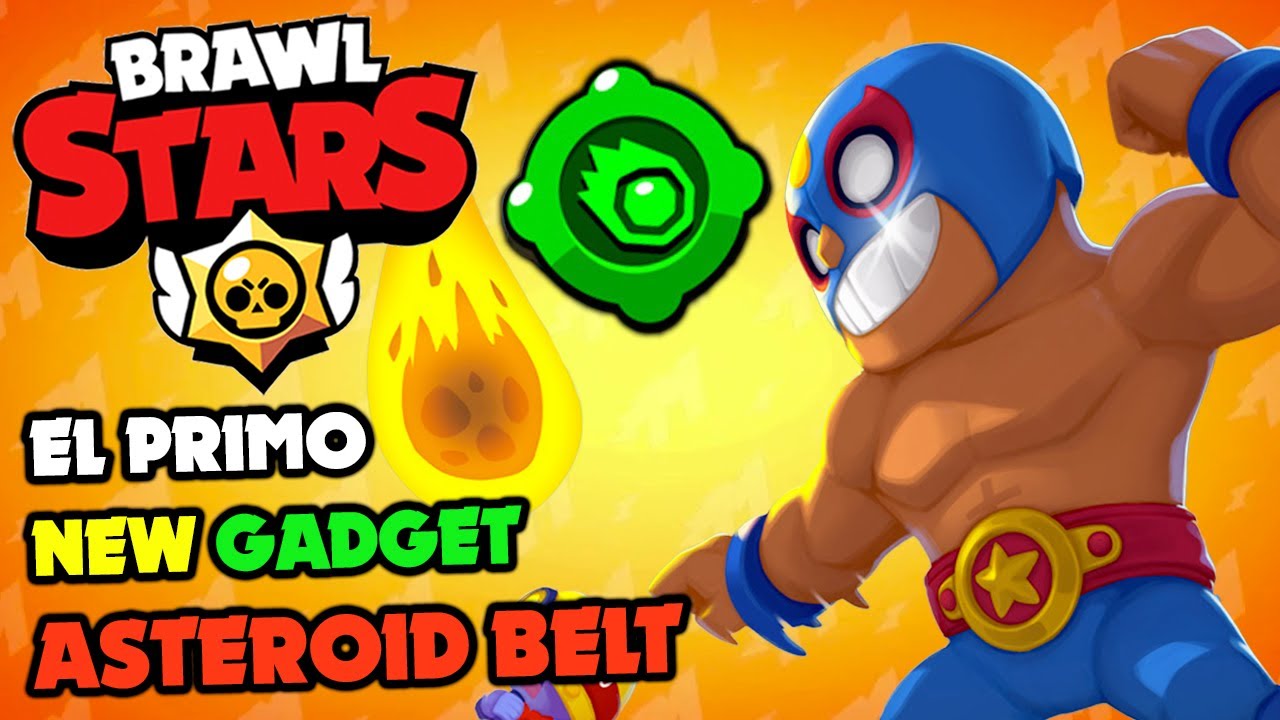 El Primo brawl stars second gadget, Asteroid Belt, can be used three times per match. When El Primo uses this ability, “El Primo summons a small meteor to strike the nearest enemy. It deals 2000 damage and destroys walls.” The meteor also knocks back the enemy. When activated, it shows the radius of the meteor on the ground, making it easier to escape. It takes three seconds to summon/fall which gives plenty of time for the enemies to get out of the range. This gadget is not consistent, however, if the meteor hits an enemy, it will charge 2/3 of his super.

There are many cases that this gadget will be useful. This gadget can be used not only to hit enemies but to break walls. A good example would be in Brawl Ball, where break the wall would help your teammate score. Another reason to use this gadget is when an enemy is chasing you and you want the enemy to stop following, you can use the gadget, which will cause the enemy to run off. You can also use this gadget against throwers. This gadget can come very handy in 3v3, since it will make the enemy’s movement more obvious for you and your teammates.

However, you should be careful when to use this gadget. Sometimes, El Primo needs the wall to survive against enemies, and breaking it might not be smart. Also, the meteor has 9 tiles reach, and remember that you can not choose the enemy to target the meteor, so know your closest enemy before you use it. Furthermore, it won’t target enemies hiding in a bush or is invisible. Note that unlike most gadgets, once El Primo dies and the gadget is activated, it won’t cancel and still target an enemy.

Now we will break down El Primo’s first gadget and his star power, then rank them using the information we gave out. 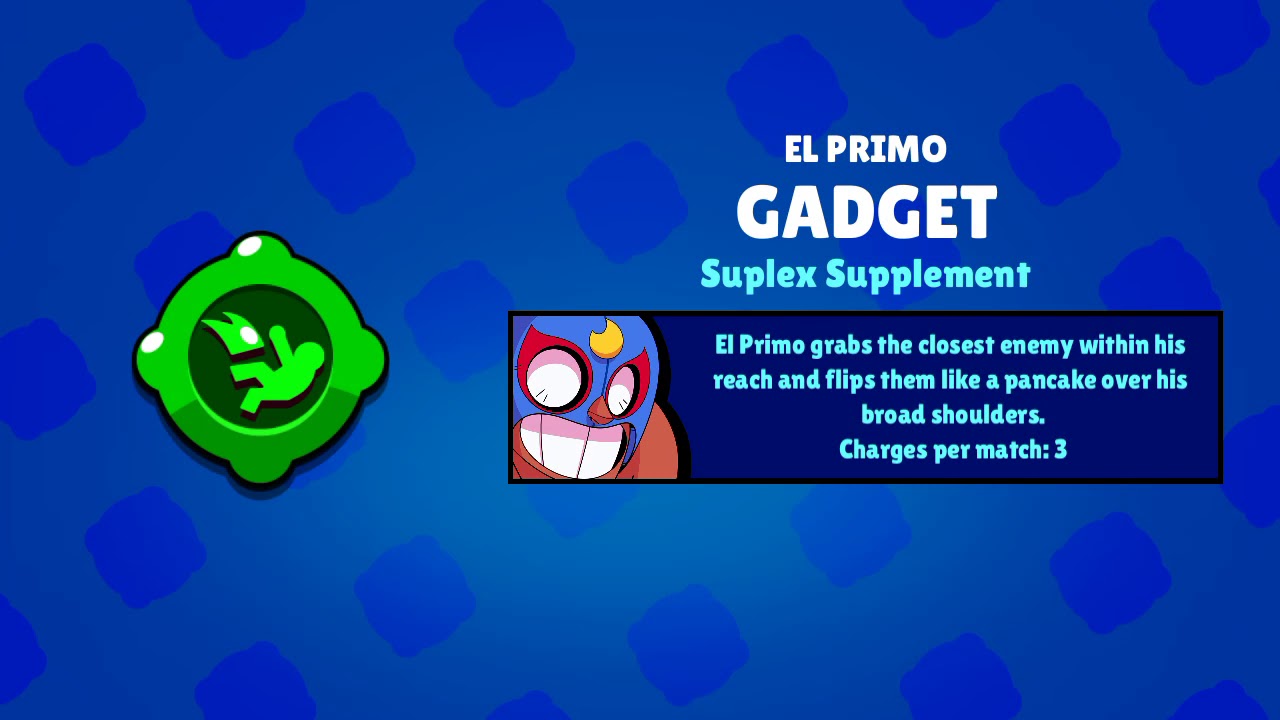 El Primo’s gadget, SUPLEX SUPPLEMENT, can be used three times per match. When activated, “El Primo grabs the closest enemy within his reach and flips them like a pancake over his broad shoulders.”  This gadget has three tile radius reach. This does not charge El Primo’s super or it deals damage. In my opinion, I feel like this is one of the worst gadget in the game, because there isn’t a lot of cases to use this gadget. However, a decent use of this gadget is to disturb supers, for example, Frank’s or Bibi’s home run swing. You can also use this gadget to take the ball from an opponent. This gadget can sometimes be used to throw enemies to your own teammates or another enemy (Showdown).

These gadgets can be used in different modes. You can use Suplex Supplement in Brawl Ball to knock out the ball from the enemy but El Primo already has enough DPS to take out the enemies. Asteroid Belt can be also useful in Brawl Ball where you can break their defensive walls, but El Primo can use his super to break the wall. In Brawl Ball, both of their uses are fairly the same. In showdown, however, Asteroid Belt is a better gadget, because you can corner an enemy to either get smashed by El Primo or take the damage from the Toxin. Also, Asteroid Belt is a better gadget in Hot Zone, which is arguably El Primo’s best mode. This can be useful to knock enemies out of the zone or push them out. Therefore, because of Asteroid Belt’s diversity, it is a better gadget than Suplex Supplement. 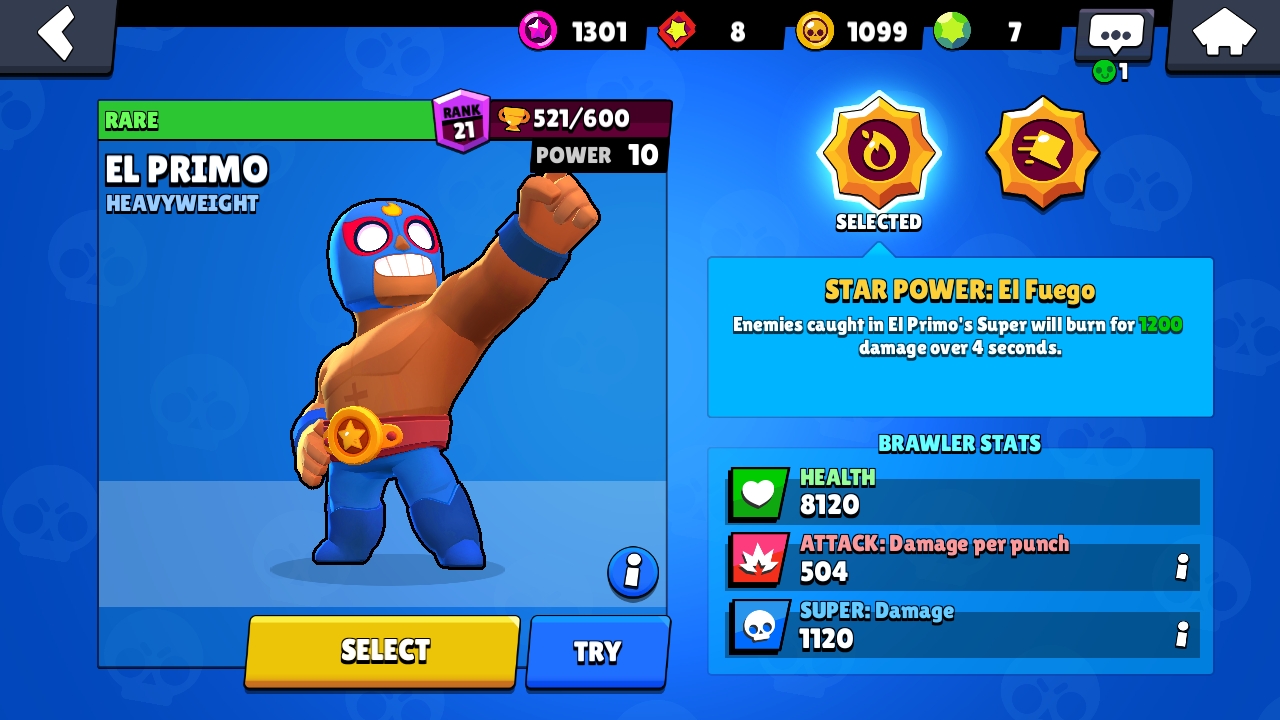 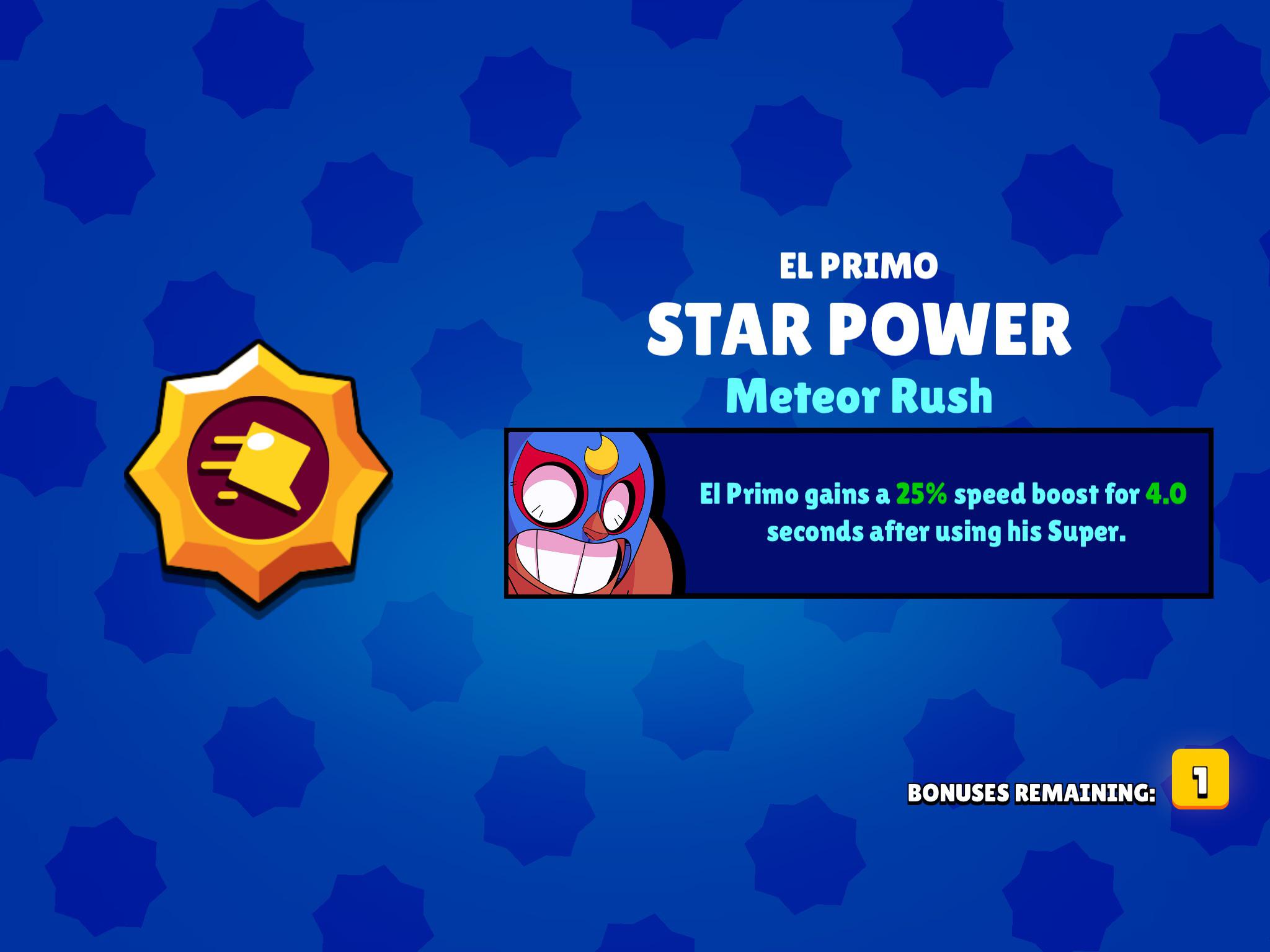 With this star power equipped, “El Primo gains a 25% speed boost for 4.0 seconds after using his super.” This means he will gain 4th fastest speed in the game – he is only slower than Rico with ROBO RETREAT, Leon with SMOKE TRAILS, and Max with her super. Therefore, most enemies won’t be able to catch up to El Primo or run out of his range with his speed boost after using super on them. This can be very useful in Brawl Ball. For example, after El Primo breaks the defensive wall with the super, you can use the star power to get the ball and quickly score. This star power can also be useful in 3v3, where defeating enemies to gain control is important.

However, if you are playing other maps, El Fuego is a better star power. With the added damage on his super, he can easily take out the enemies by landing on just a few punches. Also, the fire effect can be deadly like Crow’s poison, which makes the enemies impossible to heal. Just by landing on an enemy, this star power with the super will deal 2320 damage. The fire effect can actually take out the enemies itself after El Primo retreated, because it is impossible to heal with the firing effect disturbing you. El Primo’s best mode in 2020 is Hot Zone and perhaps that’s why El Fuego is a much better star power. 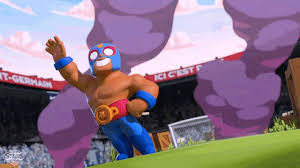 This is the worst build, and there isn’t a specific mode or map to use this.

These builds are specifically for Brawl Ball. The Meteor Rush star power is really influential since it is really easy to score with the speed boost. The gadget is really your choice. If you are more of an aggressive player, you would definitely choose Asteroid Belt. If you know your teammates have solid defense, you can go aggressive with El Primo and destroy the defensive walls to score. On the other hand, if you are a defensive player, you would take Suplex Supplement, because you can knock the ball out of the opponent’s hand. If you know your teammates, and know they have low DPS, you will want to choose Suplex Supplement, then you have three chances to defend successfully.

This build is for any mode outside of Brawl Ball. This is El Primo’s best build because it is useful in more maps. Mostly, this build is the best build for Hot Zone, El Primo’s best mode. The fact that Asteroid Belt can push out enemies from the zone can come very handy. Also, the fact that Asteroid charges El Primo’s super is going to help him have more control – and if he gets his super, he can deal extra damage with his El Fuego Star power.

To finalize our data, we have to know what skin is best for El Primo. I will rank them quickly and then review each one.

El Primo has gotten a remodel about a year ago, and it is very clean and polished. However, I like the other Primo skins better than the default. Next is True Silver El Primo. True silver and gold skins are just to flex your gold, not for the value. However, I feel like True Silver El Primo isn’t as cool as the other Primo skins. After that, we have El Brown. It has a text popping out above his head which is really cute. El Brown is an amazing skin, but I like the looks of other skins better than El Brown.

El Rudo Primo is the only skin that has a characteristic change for El Primo. I really like his purple mask and gears. Second on the list is True Gold El Primo. This skin like all other True Gold skin shows the dedication you have on Brawl Stars. However, El Rey Primo takes the first! He got those gold decorations that makes him look fancy. He got a really cool cape. Also, his win animation is just awing! He shows his pride and power. What can you expect more from a skin?

The Ultimate build is El Rey Primo skin with El Primo’s second gadget, Asteroid Belt, and his first star power, El Fuego. If you want to include a pin, I would definitely go for the El Primo heart pin. Let me know in the comments if you agree or disagree with anything I said. Until then, see you next time!