Multiplayer online battle arena style games are constantly getting updates and improvements. Brawl Stars is no different, and late in 2020, two new brawlers were added to the mix: Edgar and Byron.

With these new additions, as well as the changes that other brawlers have undergone, the tier list looks a little different in 2021!

Check out the lists below (made with the input of pro-players) to figure out which brawlers are best suited to each game mode, and see how they rank in the 3v3 overall tier list!

As one of the most popular game modes, the objective is to collect 10 gems and hold them for 15 seconds. The first team to do this will be the winner of the round. Gem Grab, like all of the other game modes discussed below (with the exception of Showdown), is a 3v3 team game.

Now, let’s see which brawlers make the cut for the S, A, and B tiers for Gem Grab!

Be sure to note that the “golden” brawler of each S tier has been rated as the absolute best character for the respective game modes. The aim of this team game is to get the ball into your opponent’s goal. Be prepared to destroy both obstacles and other brawlers in your path! The first team to make two goals wins the round. 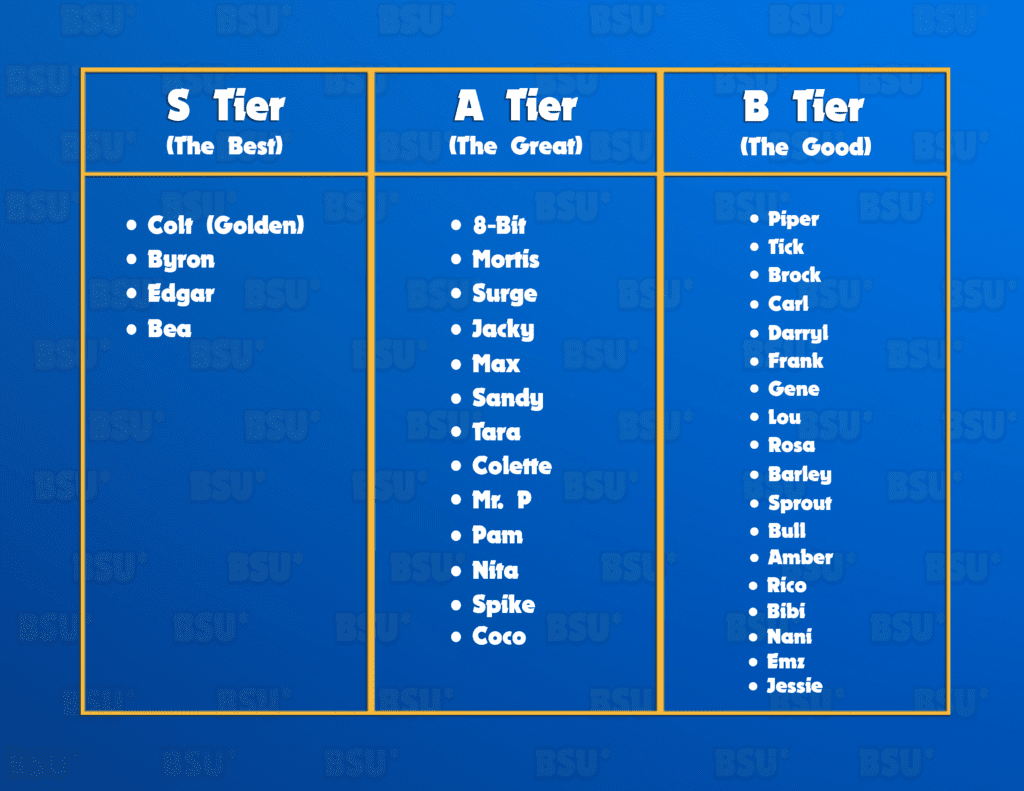 The Heist game mode consists of trying to protect a safe on your side of the map while also trying to destroy your opponent’s safe. The win goes to the team that has an intact safe at the end! In this offense-based game mode, each team tries to earn as many stars as possible by the end of a 2-minute stretch. In order to earn a star and increase the “bounty” on your head, you have to defeat an enemy player. Get the most stars to win! The goal of this mode is to protect your team’s IKE turret and destroy the opposition’s. This is done through the process of collecting bolts, which will allow you to build a siege robot to attack the enemy turret at certain points throughout the round. You win when you deal the most damage or destroy the opposing IKE turret. This mode is all about capturing zones. Each match is 3 minutes long and it takes a total of 50 seconds to capture a zone. Maintaining position is essential in this game mode, as the team with the highest percentage of captured zones wins in the end. The showdown game modes are the only ones thus far that don’t use the 3v3 team set up. In true battle royale fashion, you’re all alone (or with a partner) and fighting for your life.

In a solo showdown, 10 individual players fight to be the last person standing. Deadly gas slowly moves inwards, forcing players to face off. May the best brawler win! Much like solo showdown, the objective is to be the last one standing. The difference here is that you have a teammate, and you’re facing off against 4 other teams. If you get defeated and your partner is still alive, you can respawn! Having a partner changes the dynamic slightly, which changes the tier list.

Based on how many times each brawler appeared in the tier lists above, they’ve been rated for their effectiveness overall. The tiers for the Showdown game modes are disregarded in this list, as it only considers the brawlers’ performance in 3v3 scenarios. The highest rated brawlers are at the top of each list, and their rank decreases the further down they get. Use these tier lists to choose brawlers strategically and get the most out of Brawl Stars in 2021!