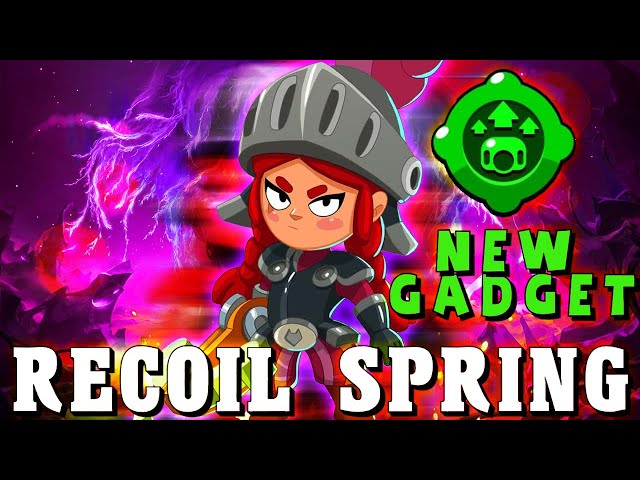 Jessie’s new gadget, Recoil Spring, can be used three times per match. When Jessie uses her gadget, her turret’s hit speed is two times faster, or doubled for 5 seconds.

Even the highest hit point brawler, Frank, can’t survive the full 5 seconds. This means Scrappy will be able to deal 2800 damage per second of its time. This can take out half hit points of most of the brawler in the game.

However, I think the best way to use this gadget is on a building, like a heist and IKE. Somewhat like Penny’s second gadget, Jessie’s new gadget can deal extreme damage in just 5 seconds.

That can be extremely dangerous since if the turret connects, it is guaranteed very high damage. Also, this can be used to defend from the Siege Bot, which is outstandingly important.

The best part of the gadget is that the Scrappy’s attack during when the gadget is activated can charge Jessie’s super (if it’s hitting an enemy).

This can help Jessie get more value out of the gadget since her turret is very important to her. 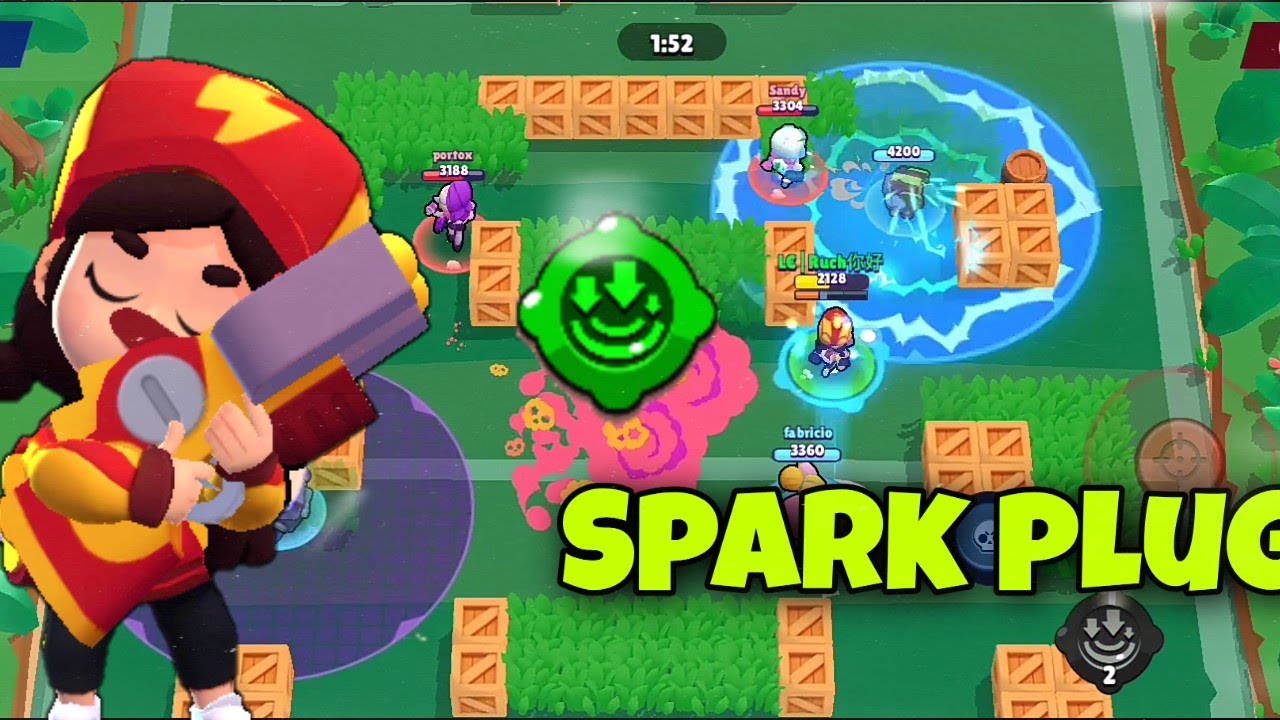 When Jessie uses this ability, “Jessie triggers a shock wave from her turret, slowing down all enemies within its area of effect.” The shockwave has a radius of 3 2/3 tiles.

This gadget can be really useful because the shock wave causes the enemies to not be able to dodge the turret’s shots. This is especially useful against tank brawlers who have to come near the turret to destroy it.

This has a higher slow rate than most of the slow effects in the game. This gadget can be used, for example, in Brawl Ball.

When the enemy is about to score, you can place down your turret and slow them down using this gadget. Another use of this gadget can be seen in Gem Grab or Hot Zone, to slow down the enemies and take them out.

Jessie’s first star power is called Energize. With this ability, “Jessie can repair her gun turret for 800 of its missing health by zapping it with her attack”.

This star power is very useful in many cases since Jessie’s turret is very crucial to her. This causes Scrappy to have a longer life span, getting more value than you would have without this ability.

Also, after Jessie’s attack is hit on the turret for healing, it also bounces to nearby brawler, turret, or building. This makes Scrappy a tank for Jessie.

While the enemy team tries to take the Scrappy down, Jessie can heal it and at the same time attack nearby enemies. This star power can be also used even if Jessie’s turret is on full health, which means you can bounce your shots on your turret to other Brawl Stars characters near it. 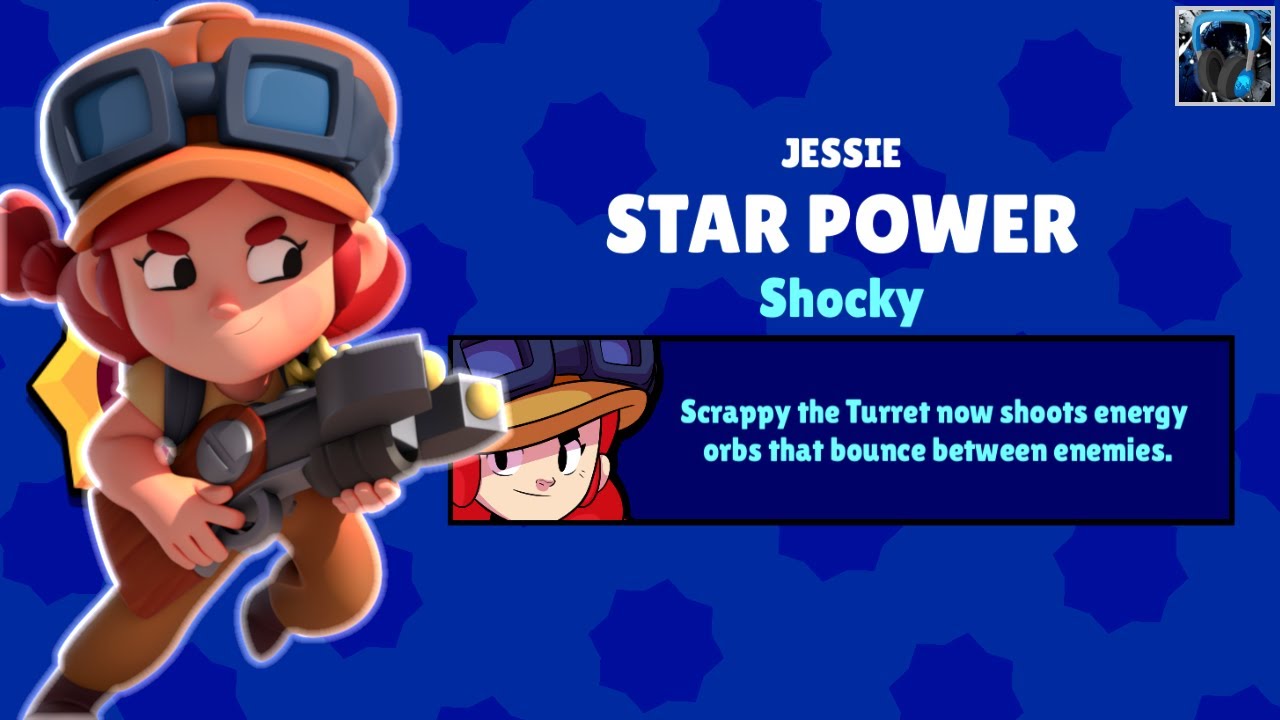 With this ability, “Scrappy the Turret now shoots energy orbs that bounce between enemies.” This defines that Jessie’s turret also bounces off enemies, like Jessie’s normal attack.

This can be very useful in Heist when Jessie’s turret can connect on the heist and the enemies near the heist. It also makes the shots a lot harder to dodge, since it can bounce from other Brawl Stars characters and come to you.

In more competitive matches, this star power might be weak because it is still easy to dodge her shots, but if the enemy is not paying attention or is not willing to take out the turret.

Another situation where this star power can come handy is when the enemies are near each other and the turret can bounce the shots off the enemies.

In my opinion, Spark Plug, her first gadget, is better. There are many situations to use the Spark Plug. On the other hand, Recoil Spring has fewer situations, though it will get extreme value in those cases.

Especially, you can expect to see Recoil Spring in the heist, because many players like to push Jessie in Heist game mode. Regardless, Spark Plug is just a bit better due to its diversity. However, Recoil Spring is very helpful when charging Jessie’s super. Both of these gadgets are better than average gadgets. 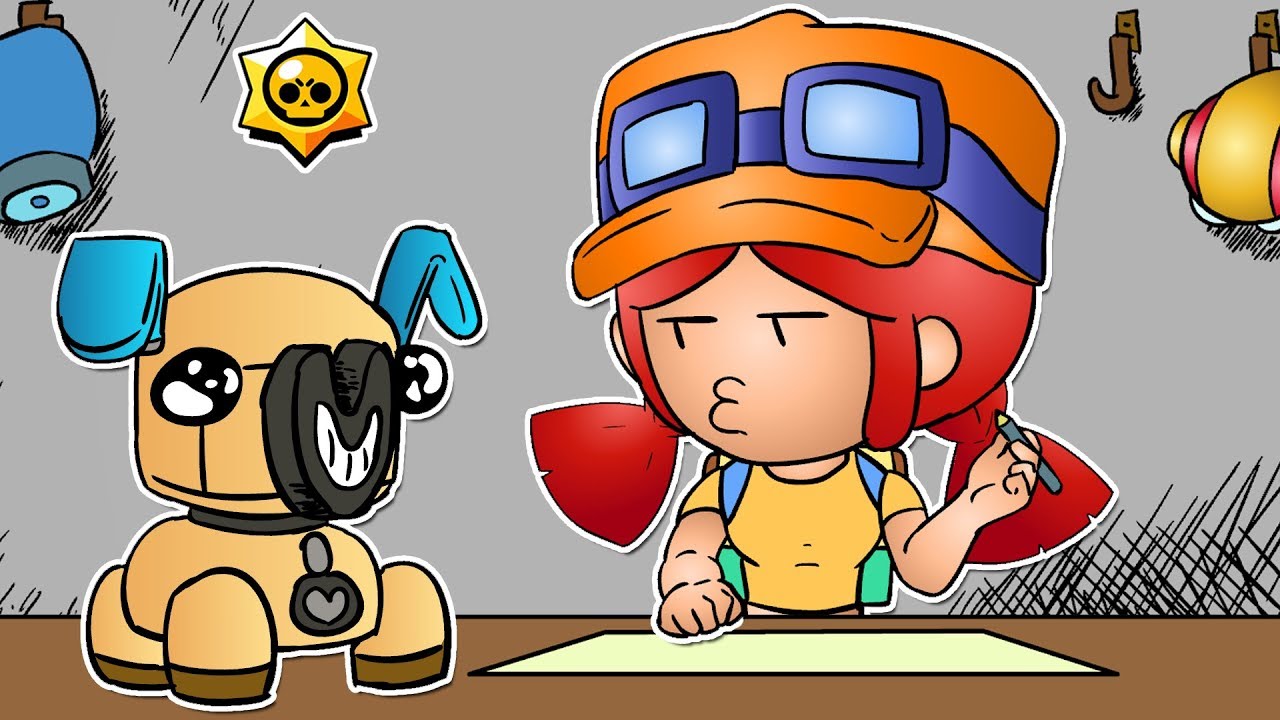 Jessie’s best star power depends on which mode you are playing and how high you are on trophies. If you are playing Heist or Siege and your Jessie is lower than 750 trophies, definitely go for Shocky.

Shocky can be very useful when the turret connects on the heist or IKE, it can deal with damage to the building and bounce to the nearby brawlers.

Also, more players struggle with this star power in lower ranges. Now the Energize in my opinion is better star power, because of its skill cap. It can be used in 3v3 matches like Gem Grab or Brawl Ball when your turret plays an important role.

I also found this star power better playing for myself, because it can really change the match. Scrappy with this star power will be useful when placed near the goal or the gem spawn.

Now let’s go over Jessie’s best build (gadget and star power combo). There are in total of 4 builds for Jessie, and they are all quite useful in many different cases.

Spark Plug and Energize are convenient in 3v3 matches. When you throw your turret down and shock them with Spark Plug, you can heal the turret and at the same time, attack nearby enemies.

This will extremely be handy in Gem Grab and Hot Zone, when taking out enemies are number 1 key to take the control. This build is the best for 1v1 situations, as it almost guarantees Jessie will win.

Spark Plug and Shocky are very similar to Energize, where you throw down the turret and stun them.

Then, the shots will bounce off from the target to other Brawl Stars characters or buildings, which can be very strong in team fights – since it is easy to damage a lot of brawlers at the same time and also possibly team wipe them.

This build is the worst of all, but it can also be applicable in heist. When you place down the turret on the heist, you can use her second gadget and also bounce of some hits from her attack to the turret.

This will make enemy brawlers have much harder time taking out the turret since it is keep being healed.

This build I think is better than the Recoil Spring & Energize in Heist and possibly Siege. Jessie’s first gadget won’t come handy in these modes, since slowing down the brawlers doesn’t affect the game a lot.

This can guarantee you 14000 damage if no enemies are paying attention, plus the orbs from the Shocky star power will take out the enemies.

In Siege, it will be much easier to take out the boss and also bounce off the supporter brawlers. Also, this combo is easy to get Jessie’s super again, which can be deadly.

This makes Recoil Spring and Shocky build one of the best gears for Jessie. It is exceptionally stronger than all other combos since it is really easy to push her with this build. Therefore, that makes this the best build.

Default Jessie Skin is very plain and the colors are a bit dull. Next is Red Dragon Jessie, which was free for players who played during the Brawl Stars China Launch.

This skin is cool and all, especially her turret, but it is very common to see this skin. After that, we have Summer Jessie.

This is really colorful and good value skin since it is only 80 gems. Tanuki Jessie is another amazing skin, due to the fact that she shoots acorns are amazing.

Second to last to review is Dragon Knight Jessie. For some OGs, this skin was one of the most quality skins back in time, and this skin’s animation and effect changes are awing!

I find this change very interesting, and this skin is somewhat free since you can buy it with 10000 star points.

If you also want to include a pin, I would definitely go for the heart one. Let me know in the comments if you agree or disagree with anything I said.