Lone Star is one of the new game modes released by the brawl stars team and its been out for quite a while. And this is the best moment to master the strategies for lone star and get the first place all the time.

You should kill enemy brawlers and for every kill the bounty on your head increases, therefore, everyone’s gonna be after you. The brawler with the highest kills or stars wins the match. 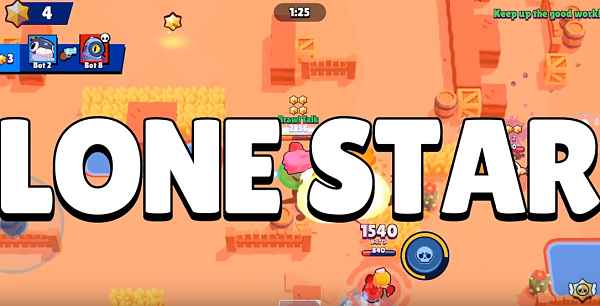 Rules are quite simple, kill and don’t get killed. But it’s not as easy as it sounds.

You are going to be surrounded by 9 brawlers so even if you can get a kill you might be hunted down by some other brawler when you’re weak.

This mode increases the chance of kill stealing especially with long-ranged brawlers where they can snipe the enemies.

Leon can use his smoke trails to get close and personal to brawlers and annihilate them.

Charge up your super at the start of the match and use smoke trails to sneak into enemies. Always try to isolate the enemy when you are about to kill them, beware of kill stealing.

Checkout how to use Leon here –Leon Guide

Besides, you can kill steal yourself, try to find a group of brawlers who are fighting one another, and super in the bush to kill both of them.

His area control attack and her very unique super make his one of the best for this mode. She can attack more than one brawler at a time.

His incredible burst potential makes her one of the strongest in the mode. The super can help you sneak and invade enemies and can let you kill multiple brawlers at once.

Her star power can help you easily steal kills!

She needs some skill to hit her shots, but once you master her she could be deadly and you destroy brawlers sniping them mercilessly.

Snappy sniping can be very useful especially when you hit your shots, kill steal as much as possible.

His very long-range and chip damage make him a highly annoying brawler for this mode, he can easily kill steal brawlers using his super and finish them off.

Bea is super powerful with her attack and super but struggles against sniper because she has very low hitpoint which makes her a decent brawler choice. Her star power makes her better by helping you in a fight and winning it by 1 HP lol.

Max is one of the best brawlers for this mode, but he’s not in the tier list as he’s a new brawler.

His very fast movement and super makes up for his low Hitpoints and his medium-range makes him a fun brawler to play with. He has quite low dps which makes him a decent choice for the mode

He’s an excellent long-ranged brawler dealing insane damage even close by. His burst damage is really good to attack brawlers behind a wall. You can reshape the map in your favour with his super.

He can 3 shot and use his super to kill almost any brawler in this mode as not many people use tanks.

She’s a really popular option especially in bushy maps and can counter brawlers like Leon and Mortis very easily.

Her super stack can kill any tanks making her very annoying in maps like Island Invasion. But she’s not a great option in maps without bushes like passage.

He does great in maps with a lot of bushes because of his eagle eye star power.

A decent brawler choice which could do well in this mode. But mastering his mechanics could help to aim brawlers easily.

He’s probably the most annoying brawler in the game but his low hp makes him very prone to Mortis and Leon.

His kills can easily be stolen but at the same time, he can easily steal kills which makes up for that.

His star power steel hoops make him a very great option for this. He can two-shot almost all the brawlers other than tanks beside his auto loading super makes him one of the best choices.

He has the highest win rate in the game, but the lowest use rate. That is because only really good players play him, but he has niche viability against squishy brawlers like Piper, Barley.

Tanks are not really a great option for this map other than the bushy once where she can be invisible with her star power and super. Shes a decent option though.

She’s a decent brawler in maps where melee brawlers flourish. Nothing more about her.

Probably has the lowest win rate just because he’s a tank and a melee brawler. Can get sniped by every brawler.

He’s a squishy brawler and can easily get sniped but his high dps bounce shots is quite good in the mode.

She does not have a very long range but she can be quite useful in maps which are not very wide open.

She can three almost all popular lone star brawlers which make her decent choice for this mode. Her healing star power could actually make her better when protected.

Not the best, because of his very slow movement, but if you camp in a place waiting for someone, that could be better. You cant really escape from critical situations making him a bad choice although he has high dps.

See also  The Best Way to Use Ricochet in Brawl Stars