Mortis Brawl Stars Character dashes forward with each swing of his shovel. As his Super attack, he sends a cloud of bats to damage enemies and heal himself!

Check out the Basics of Mortis

Mortis is a tanky support brawler and should be played aggressively in certain game modes. You gotta get close and personal with the brawlers to kill them. So make sure that you have enough dashes to finish them.

Never ever try to move in a straight line towards a high DPS brawler like Colt and Rico, they can melt you easily. Also tanky brawlers like Rosa, Primo, Darryl, Bull hard counter Mortis. So make sure they are low on HP when you dash into them. But you can still kill a shelly with your dashes and super unless she has her super ready.

Mortis super can heal himself which makes the creepy harvest even more advantageous when you actually kill a brawler with you super gaining 3060 health once you kill someone.

Coiled snake also requires some skills to use, you can use it for escaping quickly away from tanks or use it get close to brawlers and finish them. You can use the Power cube boxes in your favour to dash through it if a brawler is standing near it with coiled snake.

You can melt throwers by dodging all their shots and this allows Mortis to be the best with creepy harvest as you could constantly get recharged with HP once you kill someone.

Remember always aim your super, the number of brawlers you hit with your super the more you can heal, you will be healed  1260 hp for every brawler you hit

Don’t ever auto-aim your dashes, you may have some success doing that. But you may auto-aim all your shots into a wall at some crucial moment

This is one of the best game modes for Mortis, but take down the damage you deal with three dashes and a super and in this way, you can always be sure that you kill a brawler every time. Mortis struggles in the map without bushes where long-range brawlers melt you. Maps with bushes help Mortis to go undetected and sneak into the enemies.

Always try to land your super on multiple units to stay longer on the map as it can heal you more!

Check out the Mortis in Showdown guide

Gem Grab is probably the best game mode for Mortis, where you can change the fate of the game with just one great play where you can team sweep. You can play him as an aggressive brawler most of the times. Gem carrier is also fine but not the best role you can give him.

Sneak into the opposite side of the map and surround the enemy team on both sides.

THE ONE EVERYONE’S BEEN WAITING FOR! Honestly, I don’t think he’s good in brawl ball anymore after that ammo shoot update. I am a big fan of Mortis in brawl ball and I love trick shots and dashing to the ball to catch it when shot towards the goal post, but ultimately as a brawler, it has the lowest win rate in brawl ball.

You can still play him if your like really good with him!

It’s quite obvious that he’s “the worst” brawler for heist. So just don’t use him in the heist.

Start the game defensively, us the coiled snake you have to build up your Super.

Once your Super has been charged, start playing aggressively. Use the bushes to sneak into the opponents, and most of the brawlers in bounty have low hp, so you can stack up your kills using creepy harvest.

Seige in not really Mortis’s mode, but you can still try to use him in certain bushy maps. Use your coiled snake to steal the bolts and run away. He can really good if you dodge and juke enemy shots, and be very annoying to deal with.

You don’t want to defend the siege bot as your going to deal very little damage and going to get destroyed if you get close.

Mortis is definitely one of the best brawlers in lone star. Always try to get the first star in the map and then charge you super by getting close to any brawler and don’t mind getting killed at when you try to charge your first super.

After your super is charged, it will be recharging after every kill u make. So you can never be stopped. You can four-shot any brawler as almost no one uses tanks in lone star.

Well, he’s also the worst brawler for this mode, just don’t use him and lose.

Always circle around brawlers with high DPS like Pam, Colt, Rico so that they can’t hit their shots and aim you. Dodge and juke as much shots as possible and don’t run in a straight line ever! Always play him in the best games modes and don’t lose your trophies. And know your numbers, remember the dash damages of your Mortis and kill enemies accordingly. 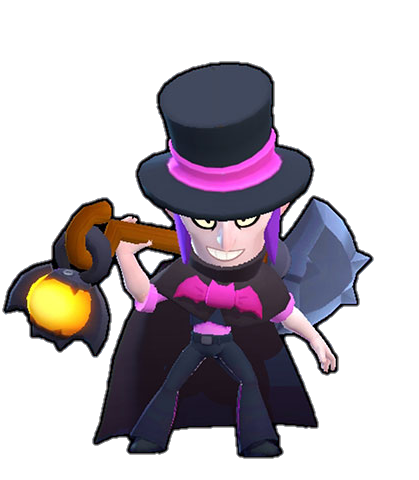 Last but not least use TOP HAT MORTIS