Let’s take a look at the Best Brawler Builds including for Max and Bull Brawl Stars. We are gonna break down Max’s both original and new gadgets and her star powers. After that, we are gonna rank the gadgets and star powers, and talk about the best build for Max. Then, we will do the same for Max’s new gadget and her best build. 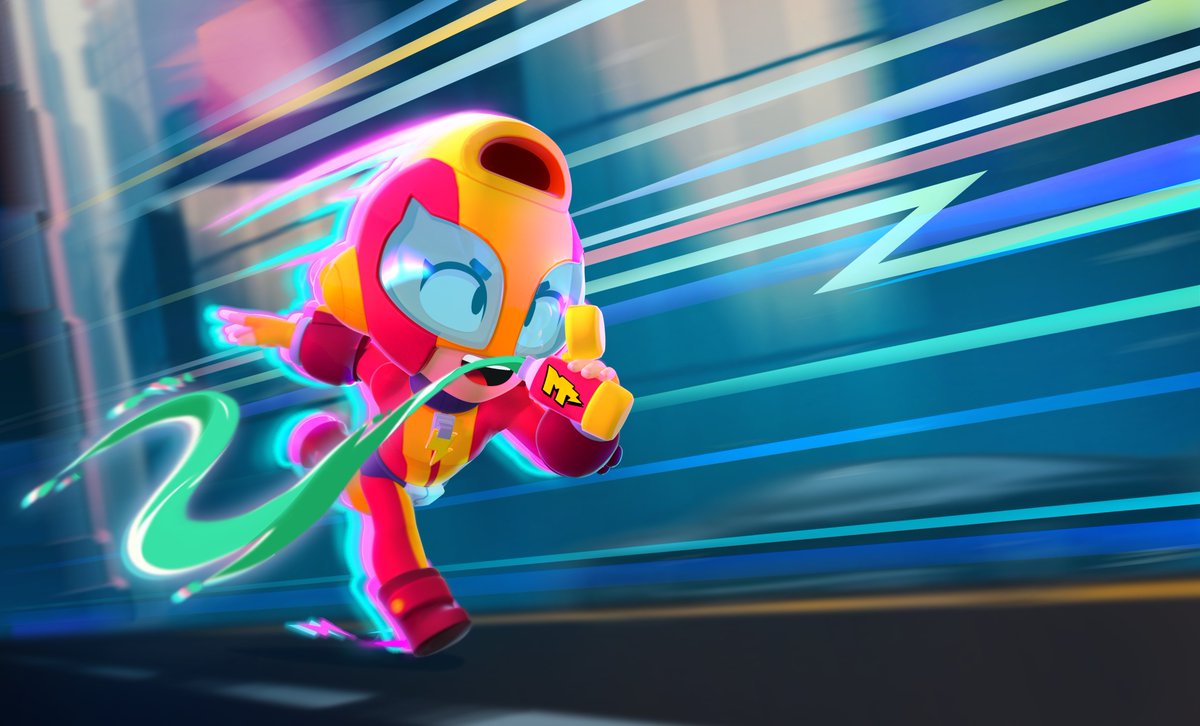 Max’s new gadget, Sneaky Sneakers, can be used three times per match. When Max activates this gadget, she drops an icon on the ground, and after 4 seconds are up, she will blink back to that place. What’s special about this is that if Max gets damaged or loses some of her health after dropping that gadget, and if you blink back, she will have the same amount of health as the time she dropped that gadget. However, if she dies before she gets teleported back, nothing will happen. Therefore, that is a waste of a gadget. Even though this gadget can be very useful, you have to know when to use it and be careful.

It is important to note that if she heals AFTER using the gadget, she will not lose any health but have the same amount of health. Therefore, this gadget can’t be used in a negative way. Also, she will retain a status effect (for example: Crow’s poison, Amber’s super). Furthermore, she will still have gems or bolts she picked up, and this gadget can be used to take gems and teleport back.

This can be used in many ways. For example, she can rush into many power-cube brawler in showdown after using this gadget, and she will heal to her original health-unless she dies. One thing very useful about this gadget is that she also teleports with the brawl ball.

Another thing to be careful is that the enemy team can see the icon when you use the gadget. Therefore, they can predict where you would teleport. She can get ambushed, and there is no way to cancel her super. Enemies can see a glowy spot if you place the icon inside a bush.

Now we will break down Max’s first gadget and her star powers, then rank them using the information we gave out.

Max’s first gadget, Phase Shifter, can be used three times per match. When she activates this gadget, she will dash three tiles to the direction she’s toward at. During the dash, she will be immune to all the damage. This gadget is very diverse and can be very effective. Phase Shifter can be used to tank high damage, for example, Shelly’s Super. However, it requires good timing, and mistiming can result in serious consequences. 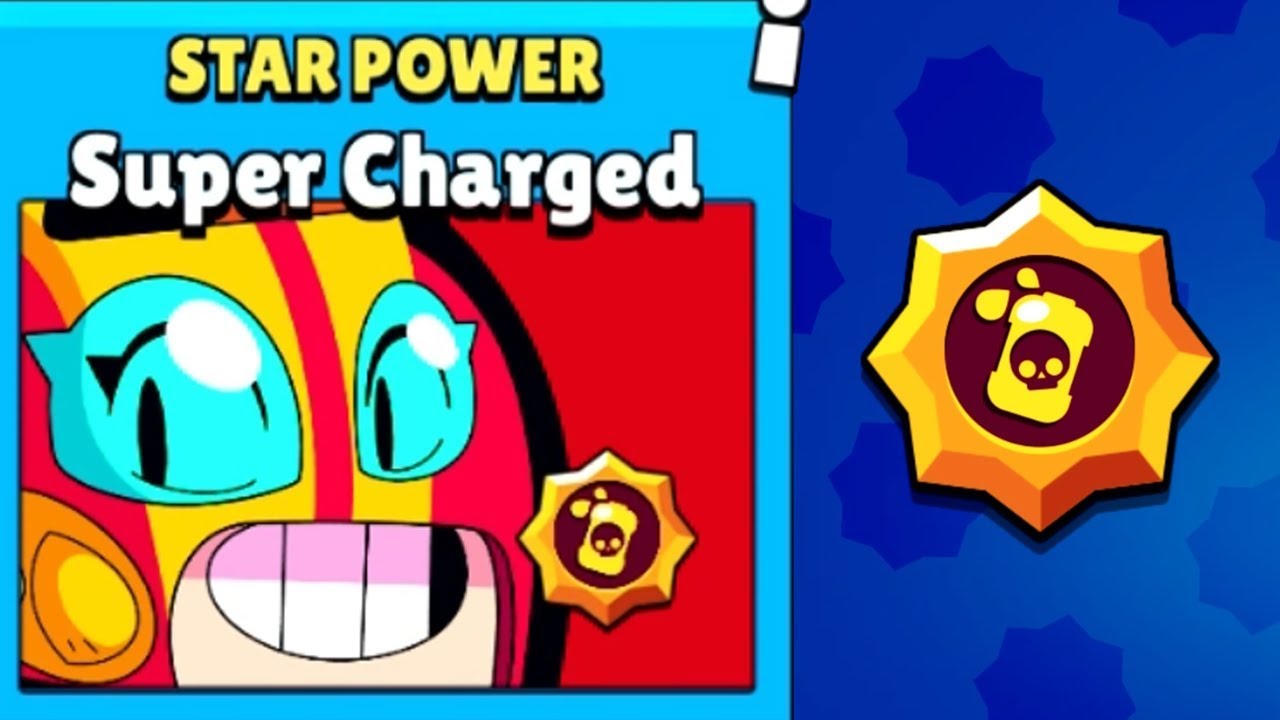 With this ability, Max slowly charges her super when she is running/moving. It takes 33 seconds to completely charge her super without attacking. However, if you are running faster, you will charge your super faster. This means that if you get your first super, it would be much easier to chain another super. This can stack with Bo’s gadget, Super Totem. This star power can be very useful in team fights, where Max can speed her teammates and gain control real quick.

With this ability, Max reloads her ammo faster whenever she’s moving. Just like her first star power, the effect increases when Max is running/moving faster. This gadget got a nerf in a Brawl-o-ween update of 2020, but it is still very effective. Therefore, it charges her attack 10% faster, but as I said, it is very strong. This can add high DPS (damage per second) to Max and also gives her much more potential. Note that if she spins, that counts towards “moving.” 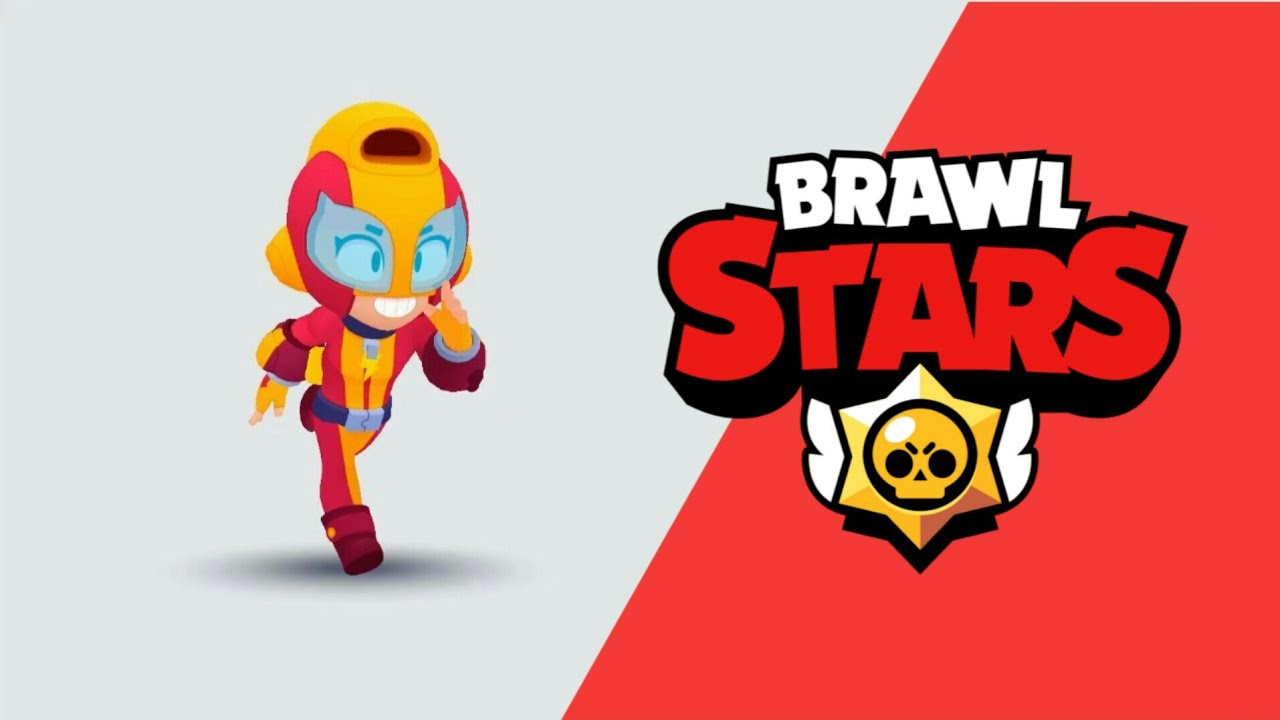 When it comes to Max’s star power, it is very obvious which one you should go for. Run-n-Gun is a better star power despite the nerf. Her Supercharged star power can also be very useful, but it is usually the best to go for extra damage. More damage can add more potential to Max in team fights.

Best Max’s gadget is very hard to call. Max’s first gadget has so much potential and can be very diverse. However, Max’s second gadget has higher skill-cap that can end in better results. She can play very aggressive with this gadget and can deal a lot of damage. Then she will automatically restore her health, which makes this gadget very good. However, the best part about this gadget is she retains bolts, gems, and even brawl ball. This gives her very little risk of dying when picking up these objects. However, her first gadget is going to be more consistent in bringing value. She can use this long dash to escape or attack, which her second gadget can also do.

This build is overall the best brawler build for Max and is all about using the best of what’s given. This build gives her the ability to play very aggressively with higher DPS and ability to escape. Her second gadget can be very good in extreme times, but this build is the best because it is so diverse.

See also  Brawl Stars PC Download Review - What is The Best Emulator To Use? 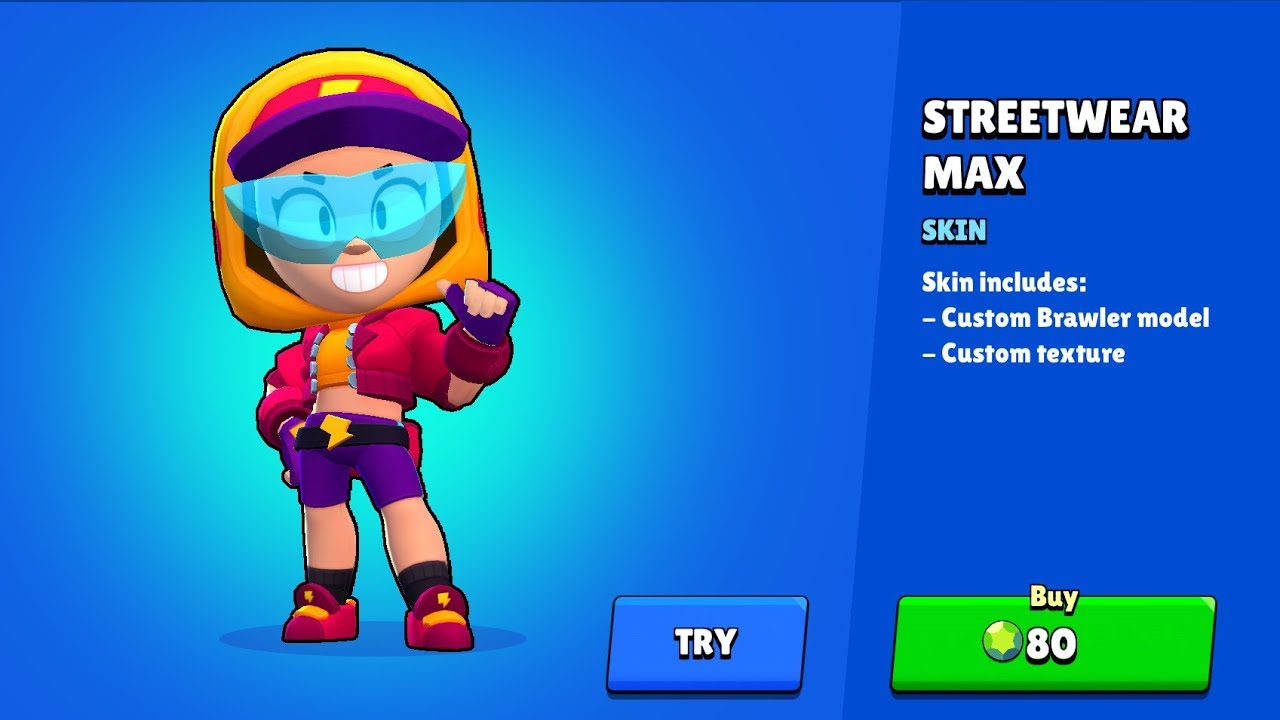 For Max’s skins, Streetwear Max is the best skin, because there aren’t a lot of skins to choose from.

The ultimate build for Max is her first gadget, Phase Shifter, with her second star power, Run-n-Gun. The skin to go for is Streetwear Max, and the best pins for her are the thumbs-up, sobbing, and sweat-drop pins. 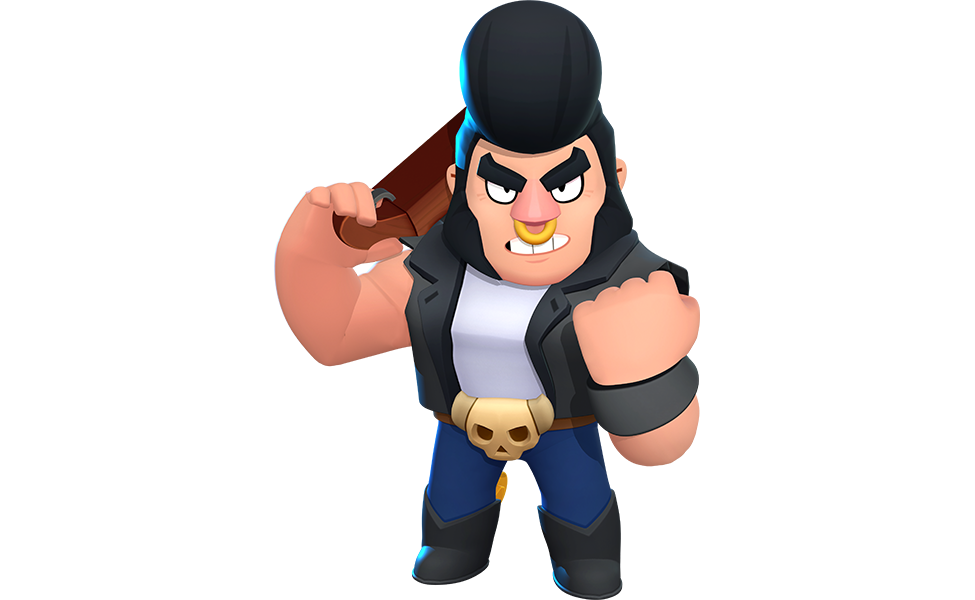 Bull’s newest gadget, Stomper, can be used three times per match. If Bull’s charging with his super, and if he activates his gadget, he immediately stops charging wherever he’s at. He also stomps and slows down nearby enemies for 1.5 seconds. Bull has to be using his super to activate his gadget, like Nani’s gadget. When he stops charging, it is already too late to use the gadget.

Bea’s super slows down enemies for 3 seconds, Crow’s second gadget slows down enemies for 3.5 seconds. However, these brawlers aren’t as scary as Bull up close. He will be able to reach enemies that are slowed very easily, which will increase his area control. What is so good about this gadget is that you can choose when to stop your super. This can be very useful in Showdown, or when enemies are really near. This is going to add much more viability to Bull.

Now we will break down Bull’s first gadget and his star powers, then rank them using the information we gave out. 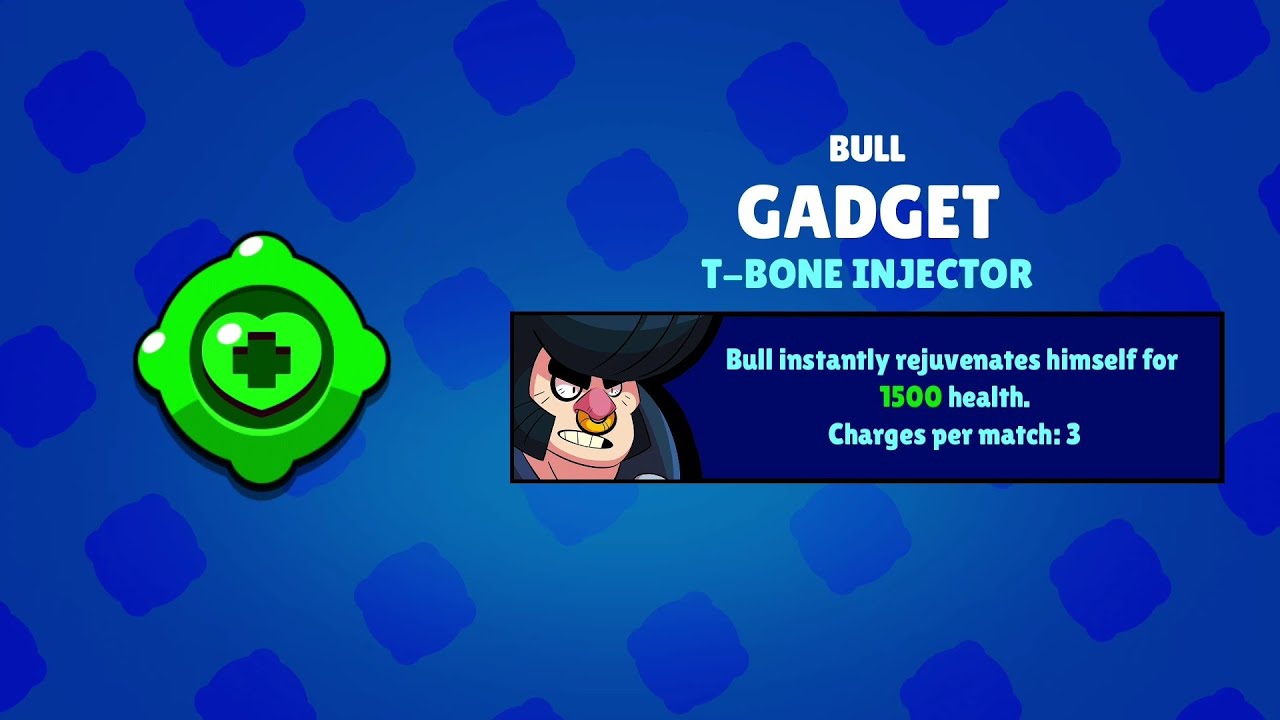 Bull’s first gadget is T-Bone Injector and can be used three times per match. When Bull uses this ability, he heals 1500 health, which is a lot of health. If he gets to use this gadget twice, the enemy will have to deal with more tankier brawler than maxed out El Primo. This gadget is very useful since it adds much more health to Bull and that will give him more viability.

With this ability, Bull’s reload speed doubles when he is below 40% health. Bull can deal with so much damage in just a few seconds, and this star power doubles it. Bull with Berserker is the last thing you want in your heist. With Bull is below 40% health, he can destroy a whole heist within 16 seconds. 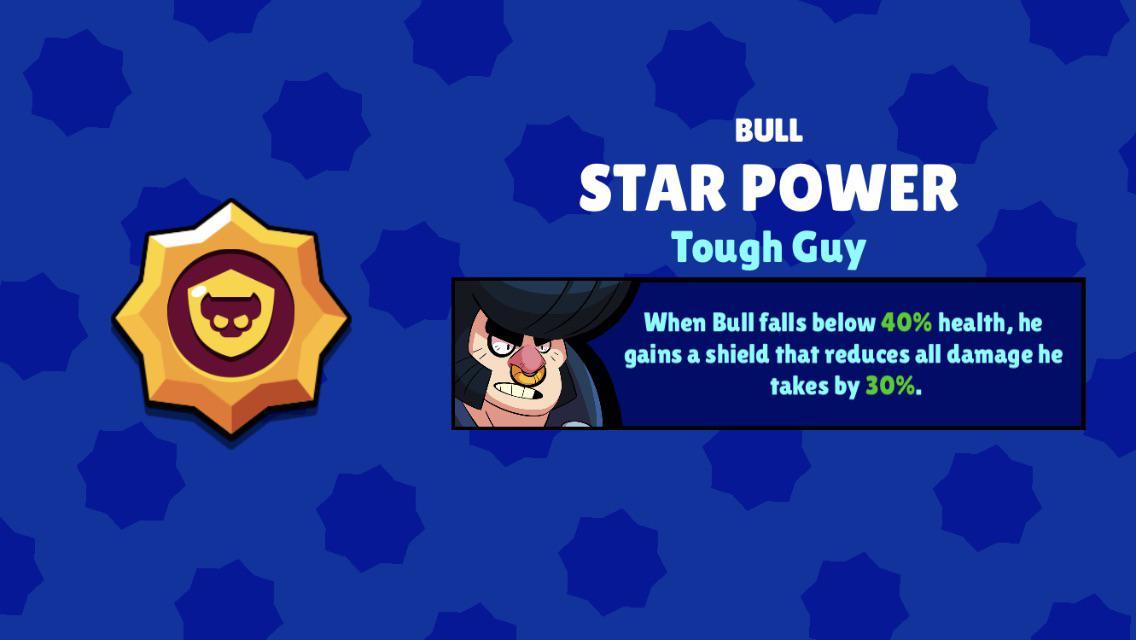 With this ability, when Bull falls below 40% health, he gains a shield that reduces all damage he takes by 30%. This star power might seem more “lame” than the other one, but this star power is arguably the better star power to go for. This shield activates when Bull reaches 2800 health (maxed), but with the shield, it’s more like 4000 health left over instead of 2800. This means that the enemy has to deal 8280 damage for them to take him out.

See also  Is the Brawl Stars Brawl Pass Worth Buying?

Between Bull’s star powers, in Heist and Siege, you would probably want to play Berserker because the damage is very important. However, almost everywhere else, you should go for Tough Guy. That’s because Bull benefits from better survivability because it means he can be on field for a lot longer. Bull is all about keeping pressure and to do that, he needs to survive longer.

For his gadgets, both of them are very good choices. Stomper gadget might be worse than T-Bone Injector, because you can only use it when you are using his super.

This is the overall best build. This adds a lot to Bull because he has better survivability, which means more control and damage done to the enemies. You can use this build effectively by waiting until Bull goes below 1300 health, then pop that gadget, and he would still have the shield. The enemy has to deal 10342 damage to take out a Bull with this build if this build is used correctly. This indicates that Bull will have more health than Frank with sponge star power. However, it is not ideal to wait until Bull loses that much health, but if you use it correctly, this can be very deadly. 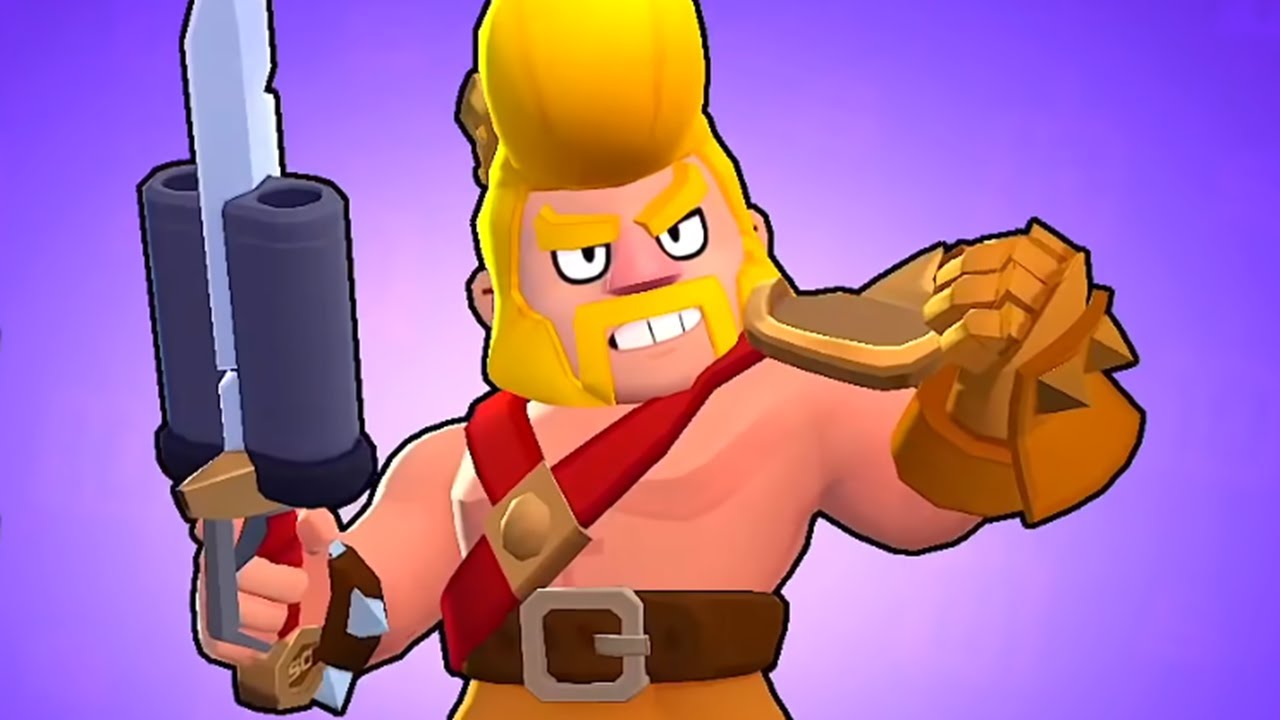 The best Bull’s skin is Barbarian King Bull, which was free for Supercell’s 10th anniversary.

The ultimate build comes to Barbarian King Bull with Bull’s first gadget, T-Bone Injector, and his second star power, Tough Guy. If you also want to include a pin, I would definitely go for the heart, sobbing, and raging ones. Let me know in the comments if you agree or disagree with anything I said. Until then, see you next time!