Dynamike’s newest gadget, SATCHEL CHARGE, can be used three times per match. Once activated, the next main attack also stuns enemies for 1.5 seconds. This gadget works the exact same way as Piper’s and Shelly’s. Since activated, it won’t go away until you use it or you can not undo it. This means you have to be careful of when to use the gadget. The best way to use it is probably right before you use the attack, so that your enemy will be conscious.

This stun compared to the other stuns is actually really good. It lasts 0.5 more second than Nita’s BEAR PAWS gadget and a 0.5 second shorter than the Bo’s SNEAR A BEAR star power. However, what makes this gadget very useful is that both examples stuns need their super to stun enemies, while Dynamike just needs an ammo. One minor problem here is that it is tricky to actually stun enemies since both of the sticks have to hit the enemy. This makes the Dynamike’s SATCHEL CHARGE gadget very skillful, but high reward. Note that you can stun more than one enemy with the gadget.

One tip to use this gadget successfully is to wait until the enemy is close to you, so that they are still in your range when they are stunned.

Now we will breakdown Dynamike’s first gadget and his star powers, then rank them using the information we gave out.

Dynamike’s first gadget, FIDGET SPINNER, can be used there times per match. When he activates this gadget, Dynamike spins furiously with increased movement speed and throws multiple sticks of dynamite around himself. Each dynamite deals 700 damage to enemies. He throws total of 20 dynamites. His attack is very spread, therefore you might not even be able to hit the enemy, or if you get lucky, you might hit two. But most of the cases, only one dynamite is going to hit the enemy.

This gadget won’t be useful to deal damage, since it would deal about 0 – 1400 damage only. However, since he gets a speed boost, that’s is when this gadget is useful. He can use this gadget when there is a close-range threat. 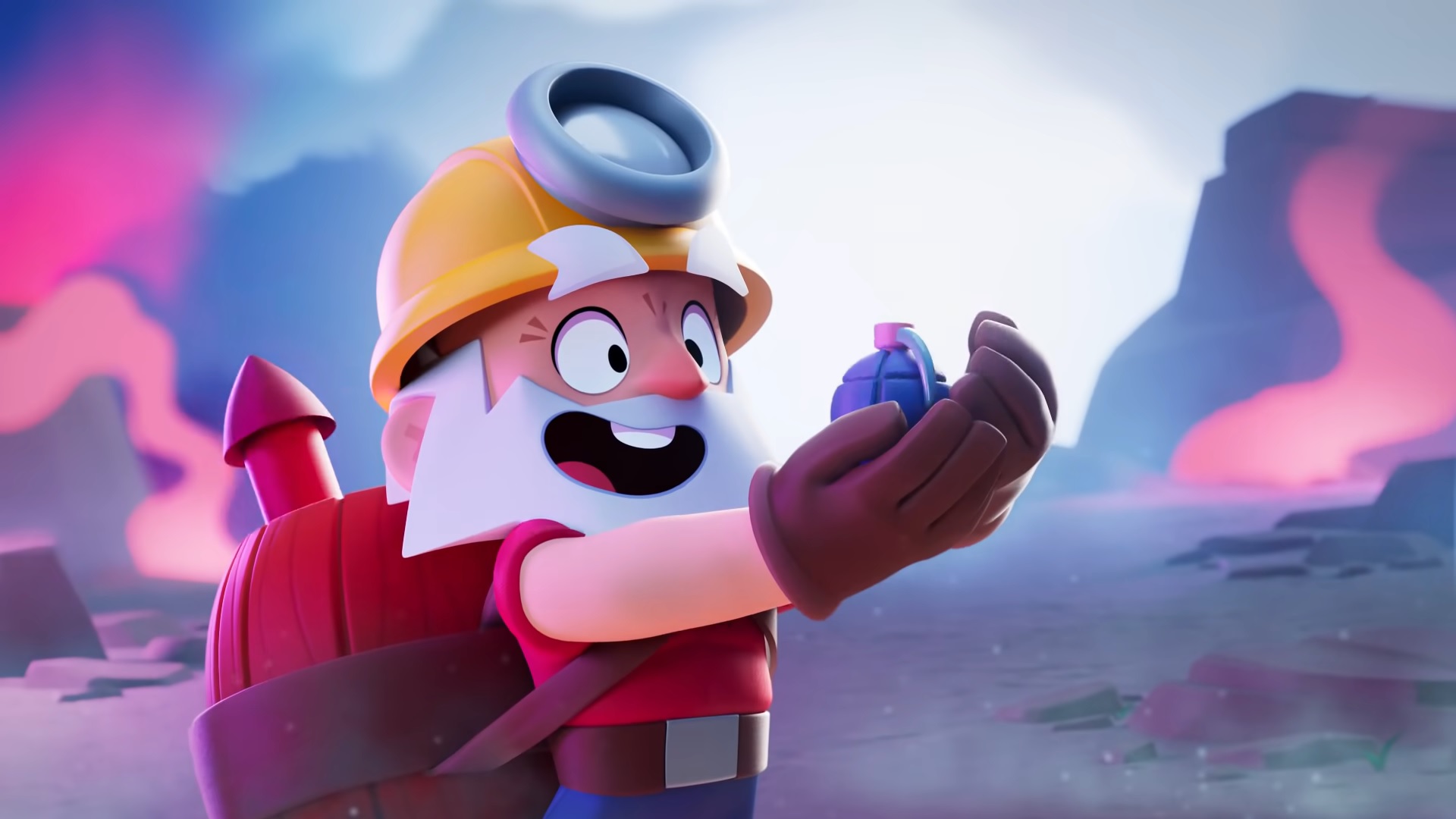 Like most of the gadgets, this depends on the player skill. If you are struggling to play/push Dynamike, FIDGET SPINNER is going to be useful to escape dangerous situations. It is also going to useful to put distance between you and the enemy, so the attack would be unpredictable. Therefore, this gadget would be better for most players because it is going to help them survive longer as Dynamike.

However, skilled Dynamike will rarely have to escape. So if you are a skilled Dynamike, it is definitely the best to go for the SATCHEL CHARGE. If you successfully stun an enemy, in most cases, that would equal death. The reason why this is true is because after stunning an enemy, you can fire three quick shots. This can take out 34 out of 39 Brawl Stars characters. In hands of a skilled Dynamike player, this gadget is going to be S tier gadget. SATCHEL CHARGE will improve Dynamike’s viability by a lot. 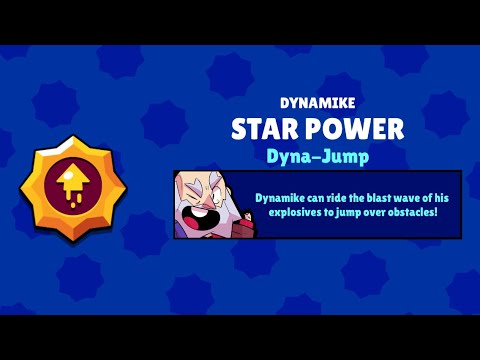 Dynamike’s first star power is DYNA-JUMP. With this ability, Dynamike can ride the blast wave of his explosives to jump over obstacles. Note that you can also use your super to jump. This ability is going to be useful for dodging shots and jumping over obstacles as a skilled Dynamike. How he will jump depends on his position near obstacles, which makes this star power one of the most highest skill cap star power in the game. Many Dynamike professionals use this star power to dodge enemies shots and cheese around. 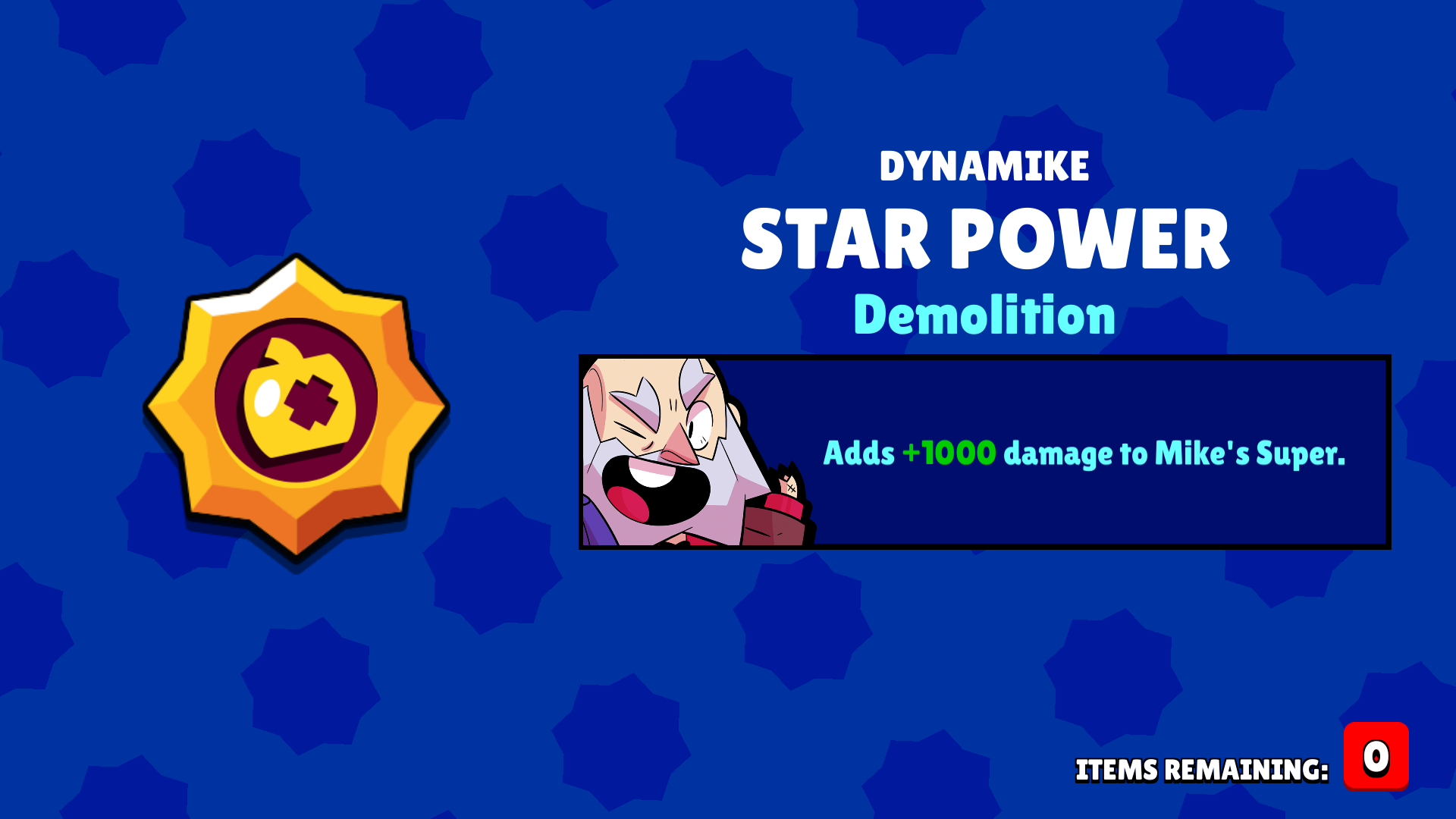 This ability Adds +1000 damage to Mike’s Super. This means that maxed Dynamike will deal 4080 damage instead of 3080 damage. Extra damage makes him able to one shot: Tick, Spike, Piper, Crow, Bea, Barley, Brock, Nani, Rico, Gale, Colt, and other Dynamikes. DEMOLITION is going to help him survive longer, because you can take the enemies out quickly. This can also help him in one of his best modes, Heist. He can deal extra 1000 damage every time he uses his super on Heist which might be game-changing. 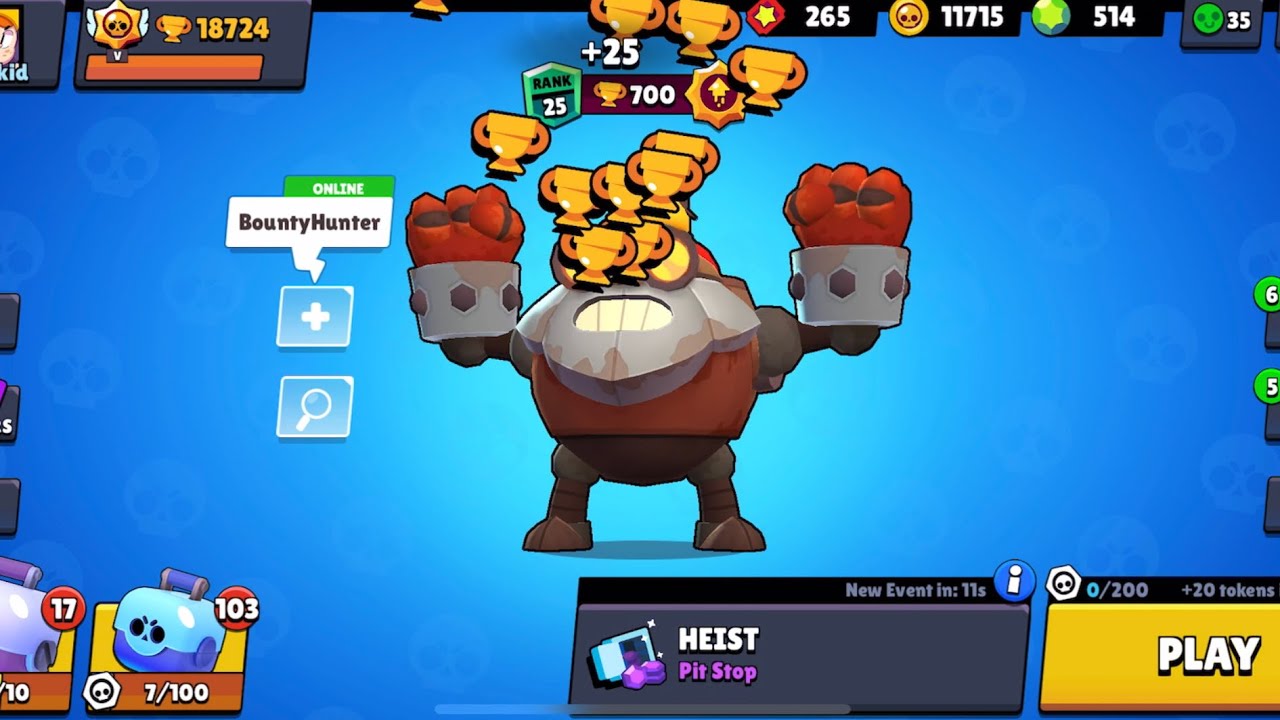 Like his gadget, his best star power also depends on what Dynamike player you are and how good you are at him. When you unlock DYNA-JUMP, you should play around with it because it’s so much fun! However, only top Dynamike players will be capable of playing DYNA-JUMP. In fact, most professionals will agree that DEMOLITION is a better star power for most of the cases. At the same time, though, professionals agree that someone really good with DYNA-JUMP is hard to deal with.

Still, DEMOLITION would be a better star power most of the people because of the ability to one-shot some of the brawlers. DYNA-JUMP will only be used for fun or when it’s beneficial to jump over obstacles – unless you are really good at it. There are a few Siege and Heist map that is going to be good for DYNA-JUMP. Still, and therefore, about 90% players should play DEMOLITION, and that’s why it is a better star power.

This is the “most cheesy” and fun build to play with. If the enemy gets close, you can jump over them or over an obstacle. You can use the FIDGET SPINNER to spin on them and use the rage pin. This is the most toxic build of all, and if you want to have some fun, definitely go for this build.

This is the easiest build to play Dynamike. This combo will be great if you are struggling to push Dynamike. You can use the gadget to escape easily or to deal extra damage. DEMOLITION star power would make Dynamike’s super much efficient since it will deal with a lot of damage.

However, this is going to be Dynamike’s best build. If you master the newest gadget, you will feel very strong play Dynamike. And, DEMOLITION is going to end off almost all the Brawl Stars characters that are stunned by the gadget, and most of them won’t survive. Even if you are not a Dynamike Professional, if you can get some stuns, this build is going to be good. This build can be used to deal a lot of damage after taking out an enemy using the gadget. For example, you can stun and end off the guards in Heist and then deal extra damage with the DEMOLITION star power.

See also  Can Brawl Stars Be Played On PC? 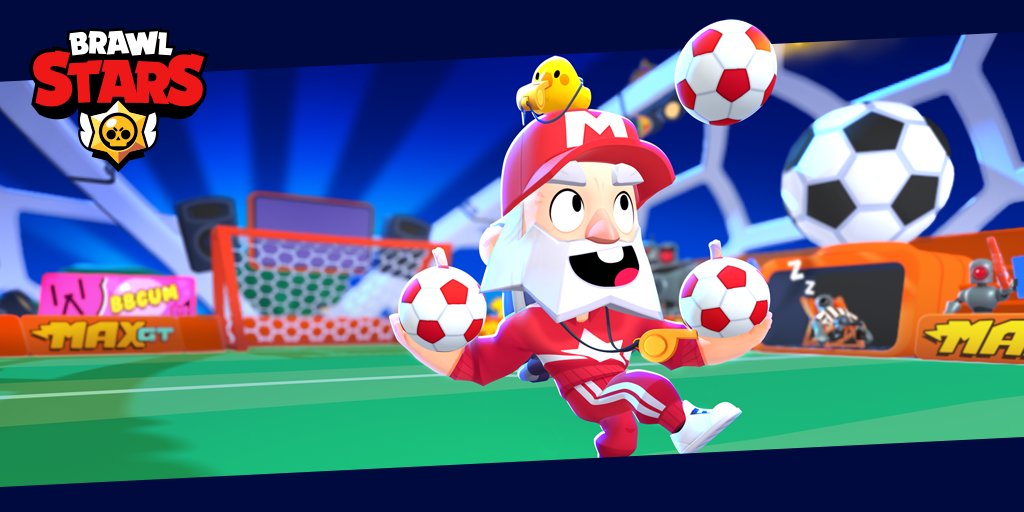 To finalize our data, we have to know what skin is best for Dynamike. I will rank them quickly and then review each one.

The worst skin of Dynamike is obviously the default skin. Even though it is a very cool design, we can’t compare default with a skin. Next up (least to best) is Santa Mike. His green and red color doesn’t really look good on him. However, the fact that he is throwing candy canes are very cool. Then, we have Spicy Mike. Spicy Mike is really cool skin and throws hot chili at the enemy. However, the second best skin is Coach Mike. His animations are very clean and amusing. He throws a pair of soccer balls/football at the enemy. He throws a bag of balls as his super. Nevertheless, Robo Mike is the coolest skin for Dynamike. He has voice change and his canary decided to take over Dynamike. Maybe he is not worth 300 gems, but worth more than 150.

The Ultimate Build is Robo Mike with Dynamike’s second gadget, SATCHEL CHARGE, and his second star power, DEMOLITION. However, if you are struggling with Dynamike, you can replace SATCHEL CHARGE with FIDGET SPINNER. Also, if you want to have some fun, you can use the DYNA-JUMP with FIDGET SPINNER. If you want to include a pin, Dynamike heart one is the best. Let me know in the comments if you agree or disagree with anything I said. Until then, see you next time!