Hello fellow brawlers. Hello fellow brawlers. We’re here for another Brawl Stars Characters Guide. This time we’ll talk about Barley’s newest gadget, HERBAL TONIC. We are gonna break down Barley’s both original and new gadgets and his star power. After that, we are gonna rank the gadgets and star power, and talk about the best build for Barley Brawl Stars.

Barley’s newest gadget, HERBAL TONIC, can be used 3 times per match. When he activates this ability, Barley throws a healing potion at nearby allies that creates an area that heals for 500 health per second. This potion would heal 500 health per second and will last 5 seconds. If you get the whole effect of the gadget, you can heal 2500, and your 2 other allies can heal 2500 health each. This is total to 7500 healing, which is a lot compared to many healers. It is more than the double of Pam’s gadget, PULSE MODULATOR. When the Barley activates this gadget, it has 1 second delay, so keep that in mind. Also, if you leave the radius of the healing, you won’t get healed.

One tip here is that you can always hold down the gadget which would show the range of the healing. It has a radius of 9 and 1/3 tile. It is longer than his normal attack but falls short to his super, LAST CALL.

Another tip to remember is that when you and your teammate is bunched up and the multiple HERBAL TONIC lands on you, it would not stack/overlay. This means there are no benefits of stacking together for more healing.

Now we will break down Barley’s first gadget and his star power, then rank them using the information we gave out. 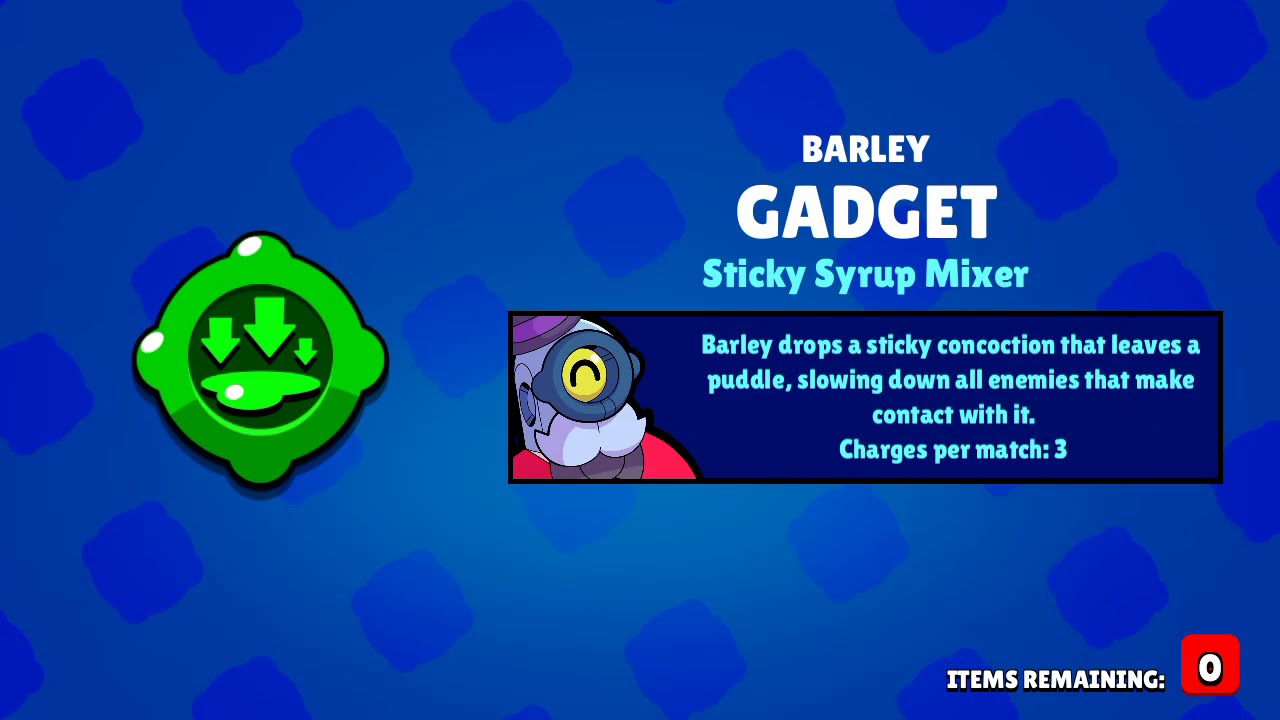 Barley’s first gadget, Sticky Syrup Mixer, can be used 3 times per match. When he activates this gadget, Barley drops a sticky concoction that leaves a puddle, slowing down all enemies that make contact with it. The area is 2 and 2/3 tile and slows down enemies significantly that is in the area. The mess stays on of 3 seconds, but brawlers caught in the area can be slowed for 4 seconds. This gadget is going to be really good for Barley because now, he can deal with short-range brawl stars characters. Yes, this means that he is now no longer weak against Mortis, but Mortis is still a strong counter.

Like most gadgets, the choice between two are determined by which modes you are playing, and what kind of Barley player you are. STICKY SYRUP MIXER is going to be very useful in Solo Showdown where he can slow down enemies. Also, the second gadget won’t have a lot of effects in Solo because you are the only one that would get healed. However, Barley’s best modes are Hot Zone, Siege, and Heist. Both of these gadgets will come handy in these modes. STICKY SYRUP MIXER is better in 1v1 situations where Barley is trying to get control of specific areas (Hot Zone). HERBAL TONIC is really useful in team fights, where you can heal your allies and survive a little longer.

To compare it even more, STICKY SYRUP MIXER would be more useful when you are in panic situations where you have to survive and drop down that area of slow. However, if you are really good at Barley or can see what’s going on nearby you, HERBAL TONIC is a better gadget for him. Barley’s first gadget is going to be used for most people, but if you are very skilled player, I would definitely go for HERBAL TONIC.

Barley’s first star power is Medical Use. With this ability, Barley regains 400 health from each attack. (it changed from 300 to 400) Notice that it doesn’t have to hit any brawlers to get the healing effect. With three quick attacks, he can heal 1200 hp, which is more than one third of his health! This star power would help him heal up and stay in control. Also, Medical Use is going to be really useful because you don’t have to fall back to heal as a Barley. You can stand behind a wall and spam your attack, and this would still be really effective. 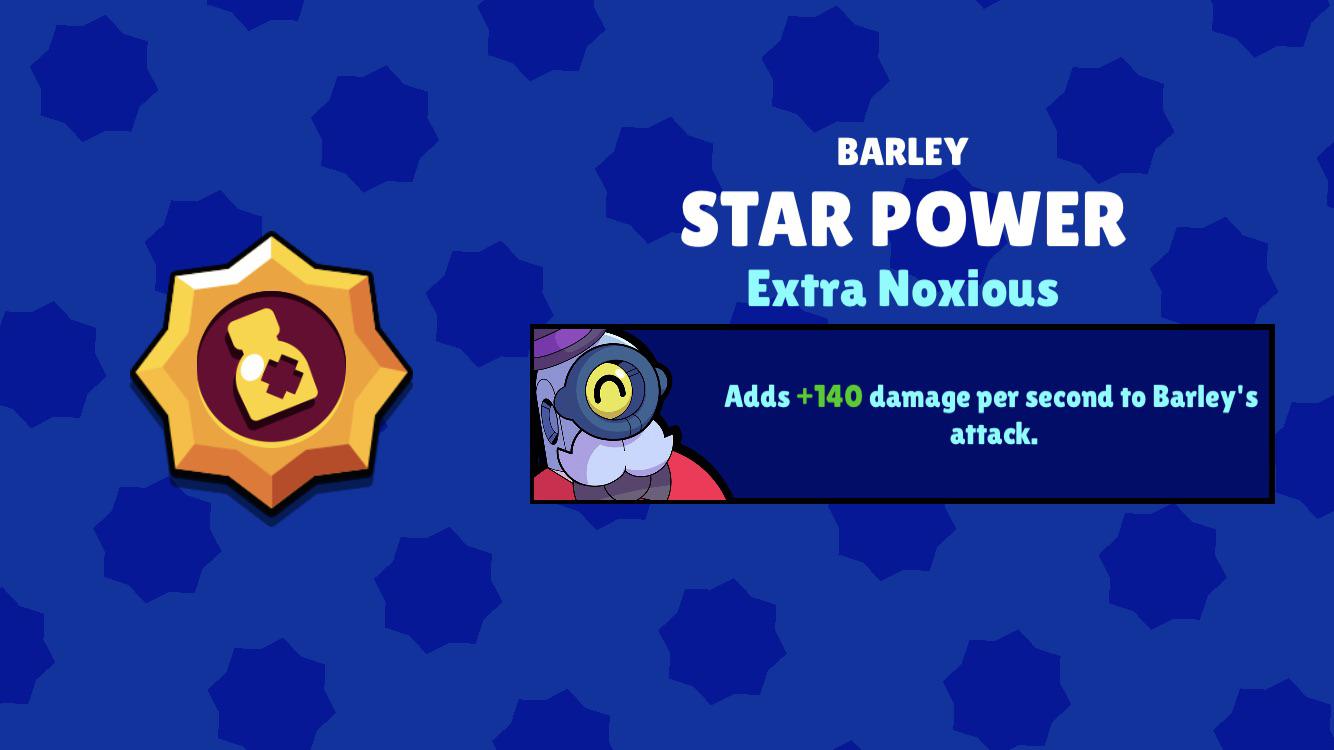 Barley’s second star power is Extra Noxious. This ability adds +140 damage per second to Barley’s attack. This means he will do 240 extra damage per attack. If you think this is not much, you are wrong. This will stack up and deal a lot of extra damage, which means it would be effective to Heist and IKE in Siege. This star power, from my personal experience, was very useful because you can end off enemies faster and quicker. You can also deal with so much more damage in a few seconds. 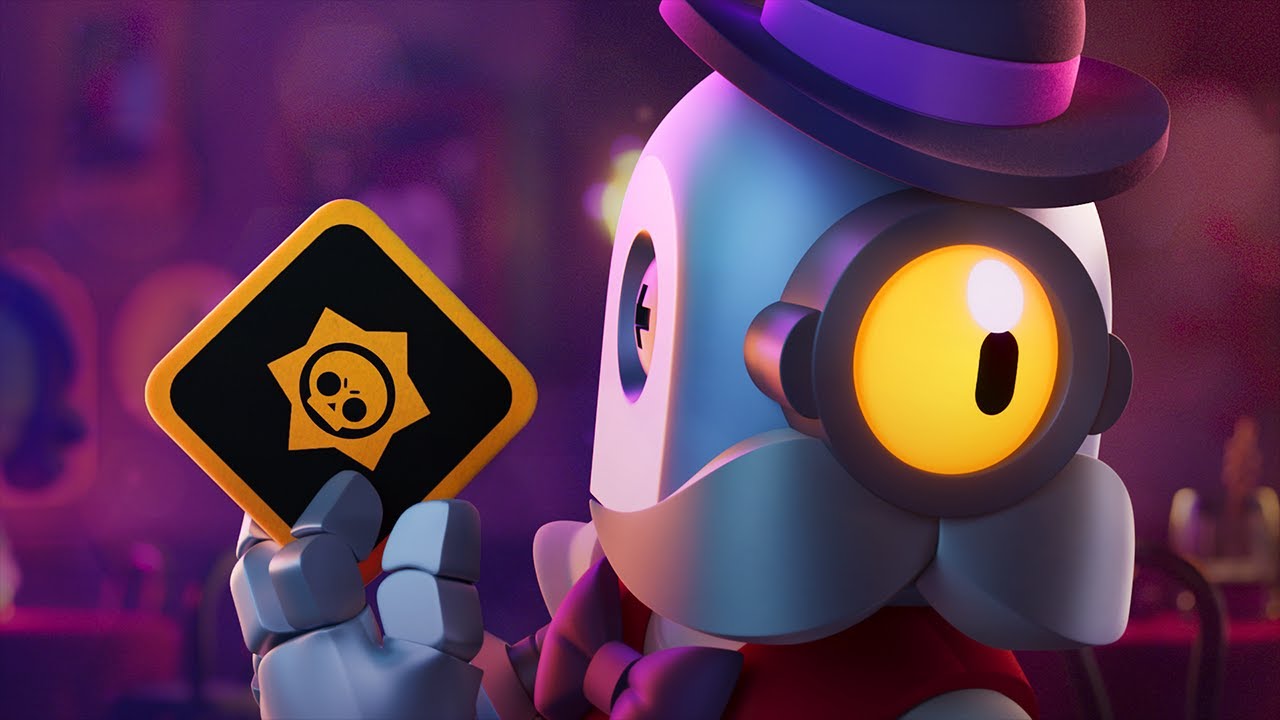 This also depends on what modes and maps you are playing Barley on. If you are playing Heist, Extra Noxious is definitely the choice. You can deal extra damage to the Heist. Not only that, but you can also melt through tanks which are played in Heist. However, if you are playing a mode where controlling an area is really important, for example, Gem Grab or Hot Zone, Medical Use would be a better Star Power. Using Medical Use would mean that more time would be spent controlling instead of falling back and healing.

To be honest, you can not fail with both star power. They are both S tier Star Power, and you can use them anywhere you want. However, if you struggle to survive as a Barley, which normal Barley players do, Medical Use might be a better option. 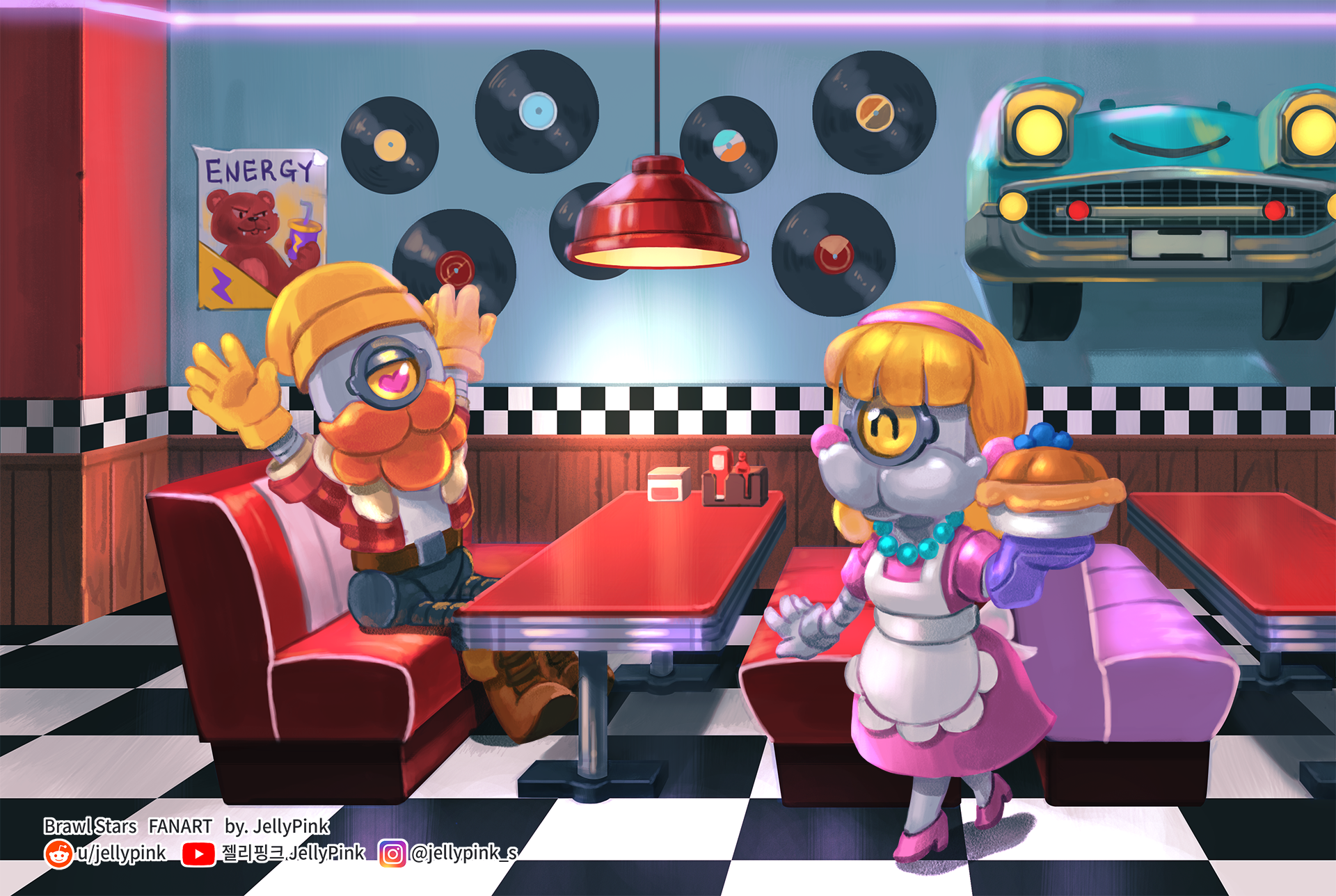 Now let’s go over Barley’s best build (gadget and star power combo). There are in total of 4 builds for Barley, and they can be all used in different modes and maps. However, there are two that is much better than the other ones. The 2 amazing builds are: Extra Noxious & Sticky Syrup Mixer, and Medical Use & Herbal Tonic.

This combination is best for Barley in Heist and Siege. He can use his gadget when the enemies come close to him. Also, with his extra damage, you can melt down tanks in both maps. You can also get extreme value out of enemies IKE and Heist, and maybe even the Siege bots using this extra damage. This I think is more of an aggressive combo, where you can deal extra damage and rush into tanks, because you got the gadget to save you.

However, the best mode for Barley in September and October 2020 is Hot Zone. It is all about controlling certain areas, which Barley is good for. This build is going to very useful to push Barley, as it is extremely diverse. You can use the Herbal Tonic gadget to heal not only Barley himself, but brawlers inside the Hot Zone. This would help the team stay in control. Herbal Tonic is really strong if the brawlers stay in the area, and since you have to in Hot Zone, this gadget is completely overpowered. His star power would help Barley himself stay alive. He is a support brawler, which this build is going to help him a lot. This in my opinion is the better build for Barley. 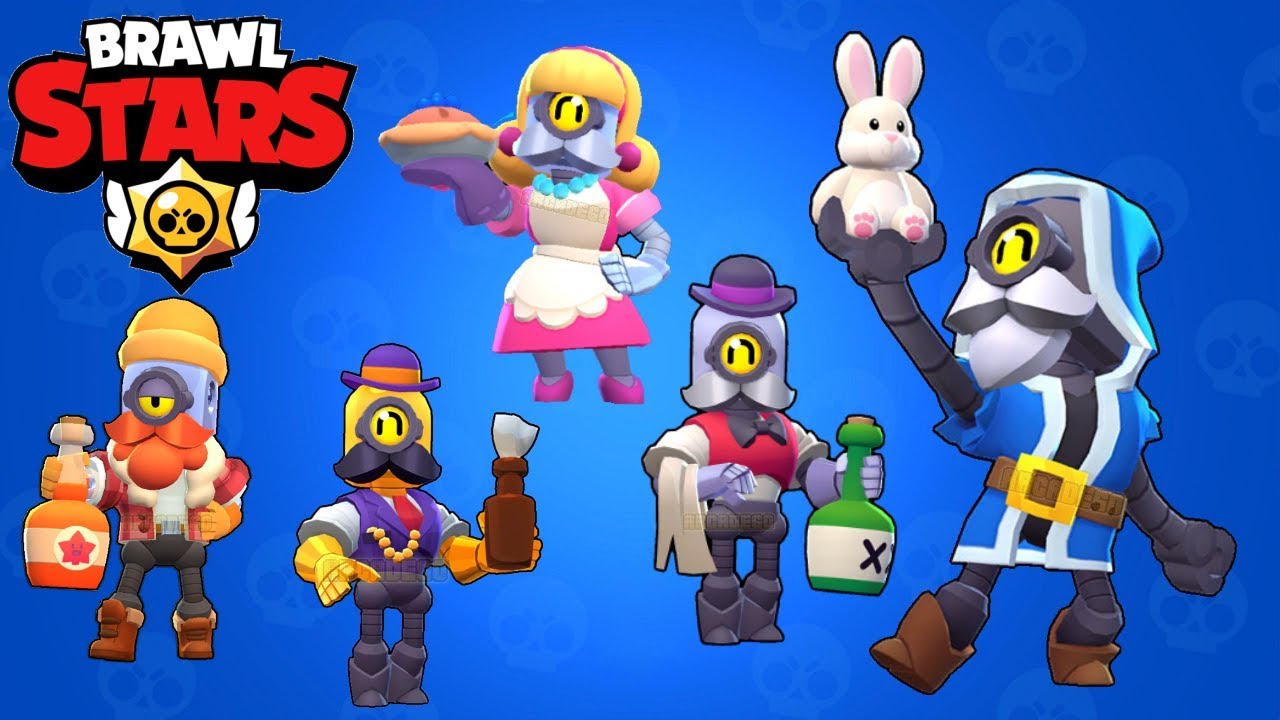 To finalize our data, we have to know what skin is best for Barley. I will rank them quickly and then review each one.

The worst skin for Barley is the Red Wizard Barley skin, and even though he has cool effects and animations, there is a Wizard Barley skin for free by connecting Supercell ID. Next skin from least to best is Wizard Barley. Even though this skin is really cool and awesome, you can see it often in the battle, because it is basically free. Next is Maple Barley. I feel like this one is more controversial. He has no flaws and has lovely animations and effects, splashing Maple Syrup.

However, the second-best is Golden Barley. He is fancy and clean. He has different custom effects, which is an amazing value for 30 gems! Now the best Barley skin is Bake Sale Barley. Bake Sale Barley throws three different kinds of pie to the enemies! She has a hilarious walking animation. She also has fantastic winning and losing animation. I mean, what can you want more from a skin?

The Ultimate build for Barley Brawl Stars is Bake Sale Barley skin with his second gadget, HERBAL TONIC, and his first Star Power, Medical Use. If you want to include a pin, I would definitely go for the Barley heart pin. Let me know in the comments if you agree or disagree with anything I said. Until then, see you next time!